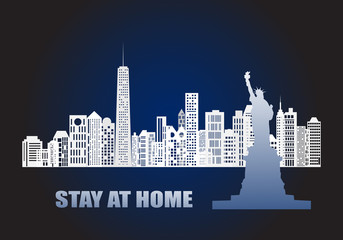 Some states across the country, which anticipated an end to social-distancing in early April, extended their stay-at-home orders to further flatten their curve of cases and minimize the spread of the new coronavirus.

New York was set to end its stay-at-home order April 15; however, due to the spike in new cases and deaths, the order was extended to last until April 29. This continues with the closure of non-essential businesses and fines of $500 to $1000 for not following social-distancing rules.

Heather Felix, senior public relations major, said, “As much as it sucks to stay in quarantine, I think it is important for states to extend stay at home orders until the CDC says otherwise. If we are released too early, it could have catastrophic effects. Always better to be safe than sorry.”

Illinois’ stay-at-home order was put in place on March 21, and was supposed to end April 7; but, on March 31, Governor Jay Robert Pritzker extended the order until April 30. This includes suspension of face-to-face learning, and the continuation of the state’s disaster proclamation, which declares all of Illinois a disaster area.

“The extension of stay-at-home orders is frustrating but necessary to stop the spread,” Alexander Price, sophomore business major, said.

“I feel like it is in the best interest of everyone’s safety but it’s negatively affecting the economy and people’s mental health,” Alyssa Cappello, senior psychology major, said.

“I think that extending home orders, although it’s tough on everyone, is something we just all need to get through and stick to if they’re necessary. We all must be safe until we can go back to our normal lives,” she said.

Ohio’s mandate was initially scheduled to end on April 6 as well, but now will end on May 1. Georgia also extended its shelter-in-place expiration from April 13 to April 30, and Governor Mike DeWine extended the state’s Public State of Emergency until May 13.

Joseph Campisi, sophomore biology major, said extending the stay at home order is necessary but he thinks the government should be doing more to enforce social-distancing.

“People continue to not respect the orders, and are thus, risking the continued spread of the virus,” he said.