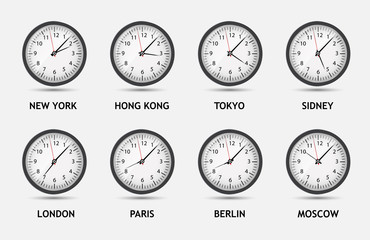 Problems with Zooming From a Different Time Zone Students from around the globe attend LIU, and now that school is taught remotely, they’re expected to attend class at their regularly scheduled time, even though they may live in a different time zone.

Mia Daly, a sophomore sports management major, resides in Maui, Hawaii, where the time difference is six hours behind New York. Because of this, Daly’s class schedule begins at 5 a.m. and ends at 10:50 a.m.

“I don’t like my new schedule at all because I think it is very unfair to have students wake up that early for class,” Daly said. “I don’t think it’s very beneficial for me since I am not fully awake and attentive in class and it is hurting my learning.”

One of Daly’s professors is allowing her to miss class once a week when the professor records the lecture. Other than that, Daly is expected to be at all class periods.

Emily Poole, a sophomore sports management major, resides in Pontypridd, Whales, where the time is five hours ahead of New York, making all of her classes at a later time than usual. Poole’s classes now go from 4 p.m. to midnight.

“I actually prefer this schedule since I have my whole day to work out and study,” Poole said. “The only difficulty is making sure I do my assignments on time. I have to make sure to do them early since they are due in Eastern time.”

“My professors offered to make an exception for these classes, but I didn’t take it because then I’d have to do an assignment for missing class. I felt like going to class wasn’t that much of a struggle,” Poole said.

Naveah Rascon, freshman forensic science major, lives in Tucson, Arizona, where they are three hours behind, making her classes earlier. Rascon’s schedule is from 5 a.m. to 1:50 p.m.

“My class schedule is going good. Sometimes it is hard waking up super early for classes but most of my teachers record them, or don’t use Zoom for every class, so when I do wake up, it’s only once in a while,” Rascon said. “The only thing I have to worry about is completing my assignments on time, making sure that I do them according to Eastern time, but to do so just takes a lot of time management.”