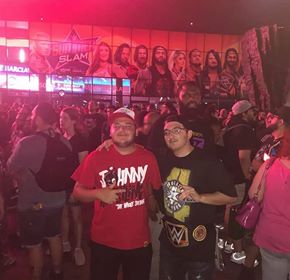 With all professional sports postponed, one industry is powering through the world’s uncertain time and making the best of it: professional wrestling.

On April 5 and 6, World Wrestling Entertainment (WWE) put on “WrestleMania,” their biggest show of the year, in an empty training facility with no audience for the first time ever. The event was pre-recorded and cost fans 60 dollars on pay-per-view. In addition, WWE’s competition All Elite Wrestling (AEW) has aired free weekly live shows every Wednesday from their empty training facility.

World Wrestling Entertainment (WWE) has maintained a prominent position in pop culture since the late 1980’s because the company travels the world to broadcast its shows. However, with restrictions from COVID-19 stopping mass gatherings of more than 250 people, as well as travel restrictions across the world, the company, as well as AEW, have not been able to go on tour.

WWE continues to run all of their shows including “WrestleMania” from training facilities in Florida. Both companies have allowed international performers, and performers with underlying health conditions, to return home without facing penalty. Nonessential staff members have been sent home as well.

Matt Weinstein, host of the wrestling podcast “The Phenomenal Forum” is a dedicated fan who supports the companies putting on their shows despite the backlash from the local government. Some fans including Daniel Casazza, junior history major, are not as supportive of the sentiment.

“I feel like it is unjust and wrong that a multi-million-dollar company is running shows and putting their performers’ lives at risk just to keep shows running,” Casazza said.

“I feel like the companies probably shouldn’t be running strictly for the safety of their employees; however, they have made it clear that anyone who is uncomfortable working won’t be penalized,” Weinstein said. “I’ve enjoyed the empty arena shows as they have freshened up WWE’s weekly programing a bit. I thought they handled WrestleMania very well, the stuff in the ring was solid, and the cinematic matches opens up a whole new door for professional wrestling. I think that AEW has knocked it out of the park on all of their no-fan shows so far.”

Even though this was the first time WWE hosted “WrestleMania” with no live fans, viewers at home were still happy to watch the program, including Nick Paniagua, junior broadcasting major.

“I think that the companies have done an outstanding job keeping their shows going while they don’t have any fans in the venue. I believe it’s just something that people can watch to not only entertain them but also to help them get their mind off of what’s going on just for a little bit of their days,” Paniagua said.

With all the uncertainty in the world there is still a place for some body slams and fun in the world of wrestling.