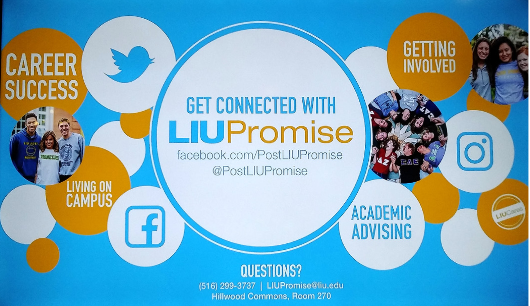 The Promise office added four new success coaches to its roster this semester to help students with academic planning and lighten the workload of other coaches.

Each student is assigned a promise coach once they’re accepted to the school. A coach assists students with scheduling, campus life and financial issues. Their office is located on the third floor of Hillwood Commons.

Shawn Washart, a senior promise director, worked in residential life at John Hopkins in Baltimore before working in Promise. He’s excited to work in an office that puts students needs all together in one office.

“The promise model creates a place that allows students to really connect with their coach and understand how to make the best use of their time at LIU, both academically and through campus involvements and connections,” Washart said.

Since joining the team, Washart has enjoyed getting to know the promise staff, and looks forward to meeting more students.

One of the four new promise coaches, Anthony White, completed his masters degree at Syracuse University, and went on to work as a success coach at On Point for College, a non-profit organization that helps non-traditional students along their road to success.

At On Point, White worked with students to instill within them the mindset that higher education is important, and that despite their barriers, strive to be the best students they can be.

White said he fell in love with advising students while working at the non-profit, which is why he wanted to take his career further, and he looks forward to making a difference.

“I want students to not see meetings as a burden, but have intrinsic motivation to come to my office,” White said. He also looks forward to being a person that students can come to about any situation, from career choices to student involvement.

Another recruit to the Promise staff, Tracy Reardon, was employed at CollClubSports, a college sports organization which houses five club sports leagues, before coming to Post.

“I believe that LIU has something extremely unique about it in terms of the Promise Office and their customer service centered structure of handling the student body’s wants and needs,” she said.

Since she joined Promise, Reardon noticed how eager her colleagues were to help each other out.

“I feel as though everyone here at Promise is super supportive of one another, and having that kind of assistance and support starting out at a brand new job, doing something completely different than what I was doing previously, has been amazing,” Reardon said.

Breanna Washington, who received her bachelor’s degree in special and childhood education from SUNY Cortland, also joined the Promise team.

“LIU resonated with me,” Washington said. “I like the promise office, as it is a one stop shop for classes, what’s happening around campus, and anything upcoming in the semester.”

Washington also filled a few other positions on campus. She’s the residence director of King’s Hall and liaison for the Black Student Union.

“Working with resident advisors has been a good time; watching them grow and develop throughout the semester is something I look forward to,” she said.

And since Washington is originally from Long Island, she said she’s “happy to be home.”

Kimmy Glasser, nursing major and student worker at the Promise office, described the new coaches as “nice and cordial,” and said that “although they just started working in the office, their presence has not gone unnoticed.”