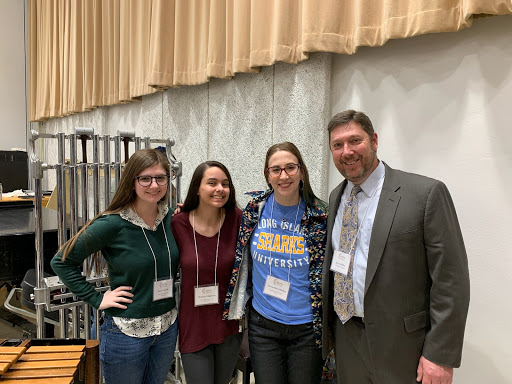 Three select students from the music department attended the College Band Directors National Association (CBDNA) Conference held from Feb. 21 to 24 at Temple University in Philadelphia where they performed in the Eastern Division Intercollegiate Band.

CBDNA is devoted to the teaching, performance, study and cultivation of music with a particular focus on the wind band medium. It’s an inclusive organization that seeks individual and collective growth as musicians. At the event, there are multiple performances played by university students from the Greater Atlantic and New England regions. Each student must be selected by a panel from the CBDNA through audition tapes.

Melissa Migliano, a music education major, has played percussion for about 13 years. “I was super excited and a little bit shocked when I was selected to play at the CBDNA conference,” she said.

Migliano was honored to know she was chosen to sit as the principal percussionist for the band. “This was a really fun and valuable experience and I’m really glad I was able to participate.”

Smith, a junior instrumental performance major, has played the clarinet for the past 11 years. Smith described the intercollegiate band as extremely talented, reminding her that all of her hard work pays off.

“Every musician was very talented, making it very competitive to claim a spot,” Smith said. “I was so excited to find out that I was accepted.”