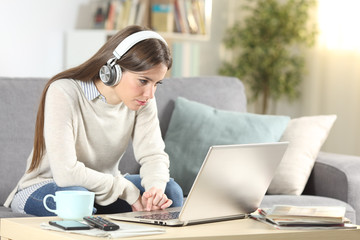 Students in Performing Arts Make Most of Online Learning With the outbreak of the new coronavirus, the university moved all classes online. This new setting was a surprise to some, as few courses are offered online regularly. This change may hinder the learning experience for some, especially those who rely on in-person classes, more specifically, those majoring in the performing arts.

Theater students rely on face-to-face classes since they rehearse different styles of acting, as well as other performance techniques. With classes now being conducted virtually, some of these students are finding the online platform difficult.

“The program is a mess, but everyone is doing the best that they can,” Lenza said. “With all classes being online, we are unable to rehearse or perform multi-person scenes, as well as those that require face-to-face interactions.”

For students to get the most from a dance class, a large studio space is required for them to practice, which many students don’t have, according to Lenza. She understands those in her major must make the most of the situation, and is thankful that none of her courses have been canceled, putting students in jeopardy of not graduating.

“Luckily there has been no talk of retaking classes at this point but we are figuring it out,” Lenza said. “Also to my luck, my play for the semester had ended right before break got out, so it isn’t an issue for me, but the rest of the plays are all canceled.”

Kaloni Smith, sophomore musical theatre major, said it was incredibly hard to try and move performance art to a non-social space. Smith is enrolled in acting, modern theatre history, and voice and speech this semester.

“Online classes have been overall okay. My professors are trying to make the best out of the situation which has been very helpful with everything,” Smith said. “Finishing the semester scares me though because of the high possibility of not being able to do my work with the lack of resources at home versus on campus.”

While Smith said he is still learning new things considering the circumstances, he is also missing out on learning new techniques.

“We no longer can rehearse things constantly and be able to give our instructors the product to take and move in the right direction,” he said.

With everything being moved to a virtual setting , Smith’s play was cut.

“I did lose my play this semester, which had a very important and relevant message that is worth people hearing, as well as my first work alone as an actor on stage that I was ready to work on and show,” he said.

Smith is also worried about the tuition money that he paid to the school, along with the fact that he resides in Oregon where they’re on Pacific Standard Time, creating a three-hour time difference.

“Honestly, my own personal vendetta with everything is that since I am going home, I’m worried about the money I already am supposed to pay for this semester,” Smith said. “Also, how am I going to be able to do all my work with the time difference being three hours behind, and still being expected to have to put the same energy as everyone else although we will be up earlier than other students on the east coast.”

The outbreak of COVID-19 has caused colleges to revert to online instruction across America. The virus is still very new, but healthcare workers and the government are doing the best they can to slow the spread and keep Americans safe. With that being said, Smith and Lenza are prepared to make the necessary adjustments until the pandemic passes.