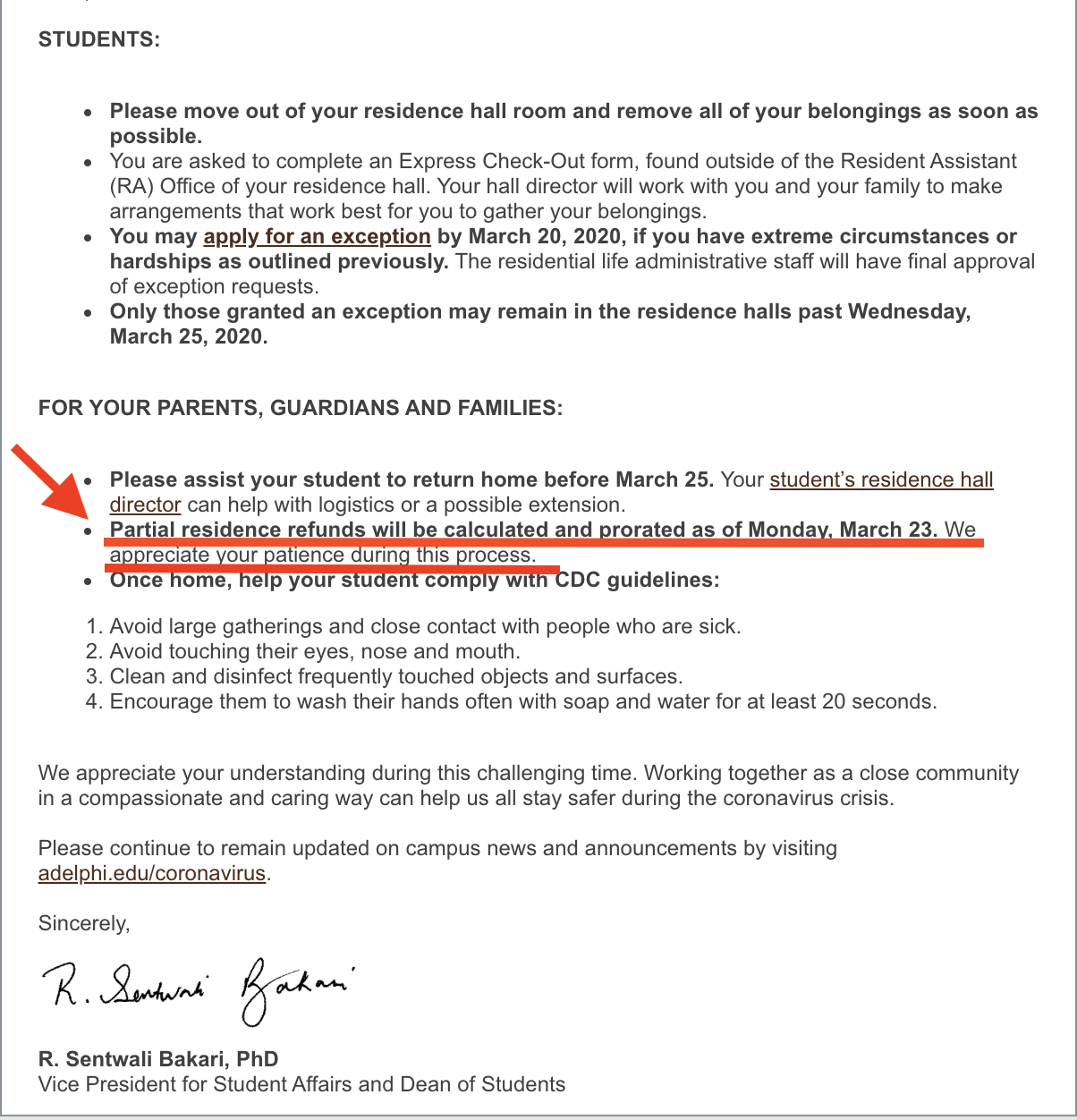 Students Speak Up About Room and Board Refunds

As students transition to online classes due to COVID-19, the university is issuing conflicting statements regarding potential refunds to residents, parents and residence-life faculty who are no longer using the facilities.

After LIU announced that classes will be administered online for the rest of the spring semester to prevent the spread of the new coronavirus, the majority of resident students did not return to live on campus.

“My mom called the school and was told by a representative that LIU would not refund students because we are still allowed to take advantage of the facilities,” BrayLynn Willis, a freshman musical theatre major, said.

After a staff meeting, however, resident advisors told students that administration was still discussing reimbursements and that an email would be sent to students with information about housing, meal plans and dining dollars. Resident students who attend Adelphi University in Garden City received an email from administration officials on March 16, six days after they asked students to return home, acknowledging that refunds would be issued. Those granted an exception were permitted to stay.

“Partial residence refunds will be calculated and prorated as of Monday, March 23. We appreciate your patience during this process,” the email stated.

Since Post hasn’t officially announced what it plans to do, moderators of the Instagram account @barstoolpost created a petition on Change.org demanding refunds for the costs of dorms.

970 people have signed the petition electronically as of Monday, March 23. Information about the petition states that students and parents have “all complained individually” but together they “can push the administration to do what’s right.”

Kamerann Burney, a freshman musical theatre major, said she isn’t too concerned about the university’s stance on the situation.

“It’s only been a week since school moved online and since the situation is rapidly changing, I understand that faculty has more immediate concerns,” Burney said. “Personally, I am no longer on campus and will be moving out of my dorm by the end of the semester, so I would eventually like a ruling on whether or not I will get my money back.”

Funds paid for room and board should be refunded, according to Burney, because currently, she’s not using either of them and doesn’t believe she should have to pay for what she isn’t using.

“Essentially, I’ve become a commuter student without a meal plan and I think I should pay the same,” she said.

Russ Drowne, a freshman gaming design major, is concerned for students who have taken out personal loans to afford LIU’s dorms.

“It feels like all that money isn’t going anywhere except to Zoom university,” Drowne said. “I personally do not want to have to pay or have extra student debt because of this. If all of my stuff is moved out [of the dorm] and I’m not utilizing any of the campus facilities, whether that be my dorm or Winnick, why should I have to pay as if I am?”

While students not living on campus desire refunds, those that stay are trying to get what they paid for.

“The vast majority of residents have left early and the ones that are staying behind are there because the school will not return the money we paid for room and board,” Brenden Rosario, a freshman business administration major, said.

Room and board is incredibly expensive, according to Willis, who doesn’t feel comfortable throwing that kind of money away.

“I don’t want to live on campus just because I paid for it,” she said. “There are few people there anymore and it’s just not the same.”

The Pioneer reached out to the Promise Office and administrative officials, but no response was received. As of March 29, students are still waiting for clarification.