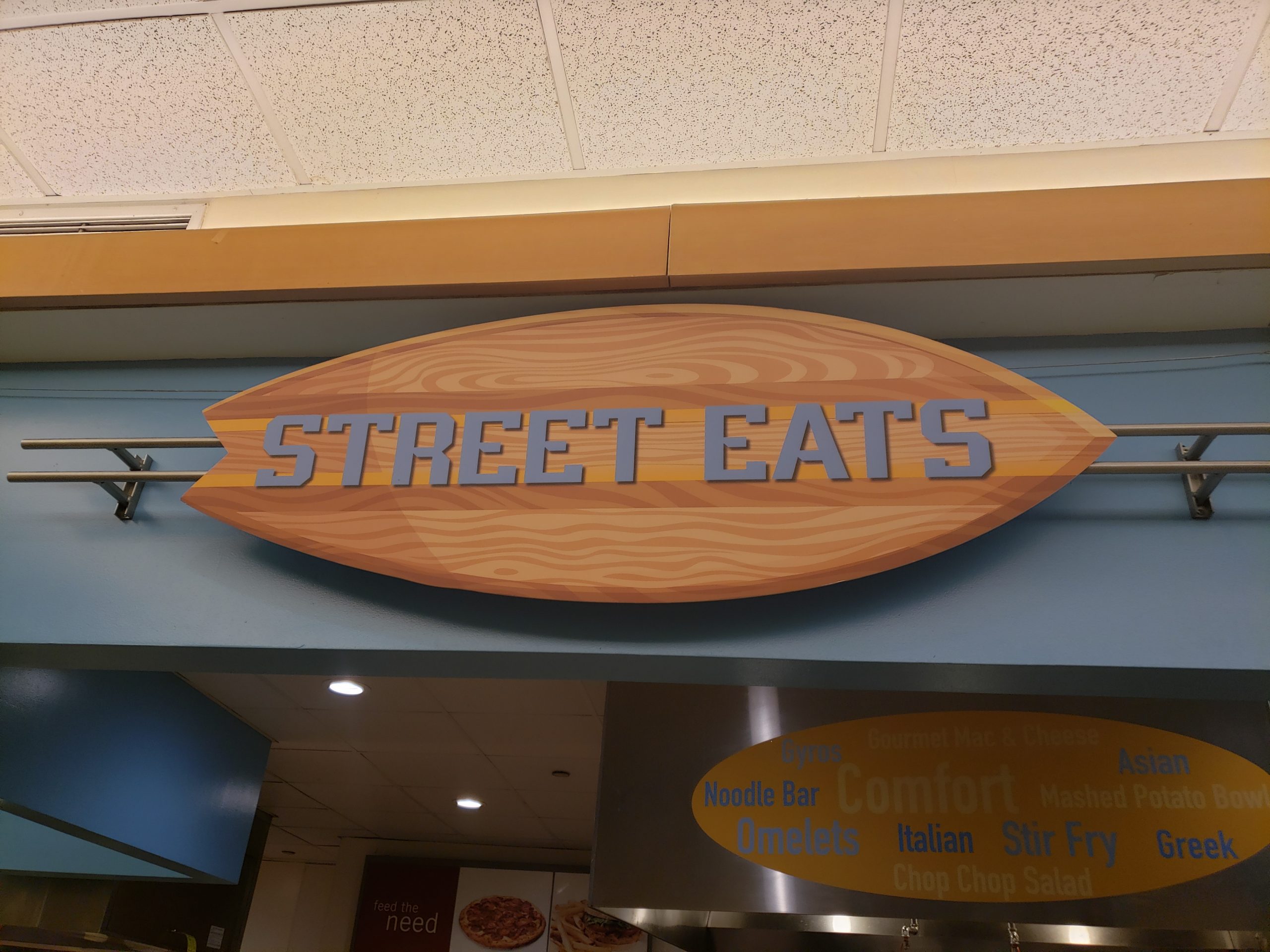 Winnick Student Center is the go-to dining facility for some resident students on campus and has been for years. In the midst of the university’s rebranding as the LIU Sharks, themed interior decor appeared in the dining hall over winter break. In addition to the university blue paint job done in the fall 2019 semester, Winnick recently adopted surfboard shaped signs over each of the different food stations.

In regards to the signs, “It’s trying a little too hard. It’s a college dining hall,” Rachel Rienecker, a first-year MFA acting student, said. “I get that they wanted to change the colors to whatever our new school colors [are], but probably just leaving it alone would have been better.”

Another student enjoys the bright setting the new design provides. “It’s more welcoming. I think that for a student whose coming into the university, it’s more appealing than what it looked [like] previously,” Louis Copertino, senior public relations major, said.

“I kind of noticed it and I thought they looked okay,” Kate Gelvin, senior nursing major, said about the decorative signs. “I don’t really have much of a preference, I’m kind of neutral towards it.”

“For the incoming freshmen, I think it’s nice for them because they’re coming in as Sharks,” Amanda Jean-Louis, senior vocal performance major, said. “Whereas there’s us [seniors] who’ve been here since green and gold, so I [say] bleed green and gold forever.”

Other blue and gold decorations include glass containers filled with colored stones that sit atop locations such as the salad bar. The tables are currently still green and gold, as are the chairs in the Gold Coast Room. The result is a mismatched interior as more changes have yet to be made. “I think that’s something that’s just going to take time, and it’s probably really expensive to change, so they’re probably just waiting until they have enough money to do it,” Gelvin said.

A standalone waffle bar was added next to the dessert counter, neighboring the “Home Zone” section. Also, the “Street Food” section was renamed to “Street Eats.” A food warmer display was added over break, where at the grill station, students can pick up portioned trays of french fries and sweet potato fries, the latter being a new addition to the dining hall’s menu. “They’re actually good, so I was impressed,” Gelvin said.

“I think it’s more sanitary what they did with the fries, I think that’s a really important thing that they did because sharing hands is a way kids can get sick,” Copertino said. Previously, french fries would be set out in a warmed tray so students could use tongs to grab their desired amount and place it directly on their plates.

“I’ve been at Winnick more recently because of the change,” Copertino said. There are more changes he hopes to see in the future. “I remember they used to do sandwiches during lunch,” he said. “When they would make them fresh, it’s so much better than when they pre-prepare them in the back.” This service provided a personalized aspect of attention to detail, according to Copertino.

Jean-Louis hopes to see healthier food options incorporated into Winnick’s menu aside from salads. “I’m trying to eat healthier but all I really have to choose from is a burger or whatever’s over [in the Home Zone],” she said. “It’s not always healthy even though they have a vegetarian option. I’m not a vegetarian.”