The Short Films of Tribeca

Film festivals are a veritable proving ground for young bloods and up-and-comers to show their creative skill, especially when it comes to crafting short films. These shorts show industry buffs who has the chops to be economic, creative and original. They’re like visual business cards. The Tribeca Film Festival, held this year from April 16 through 27, screened dozens of shorts in slyly named categories with common themes.

For example, the Totally Twisted category delved into the realm of dark comedy, while Handle with Care provided stories of an uneasy, anxiety filled quality, with characters who seemed to be in odd states of suspension and impending emotional or physical danger. These categories provided a fun way of framing films that were somewhere on the spectrum of being intellectual, flat out idiotic, and everything in between.

The Totally Twisted program screened films that were odd, funny and a little off the deep end, sometimes in an unflattering way. “The 30 Year Old Bris” directed and written by Michael D. Ratner has a fun concept: a devout Jewish woman asks her non-Jew fiancé to get a ceremonial circumcision before they tie the knot. A lot of potential here for irony and some controlled Jewish humor, perhaps ala Woody Allen or Coen Brothers witty schtick. But the film mires itself in dick jokes and cringe worthy antics, which were semi-expected given the plot, but seemed very contrived.

“The Body” directed by former HorrorHound journalist Paul Davis played out in a similar fashion, deriving most of it’s appeal by it’s shocking the audience. The short, which stars Alfie Allen of Game of Thrones fame, tells the story of a professional killer who carries his kill through crowded streets and parties with no worry — it’s Halloween, and everybody thinks he’s just a master costumer dressed like the main character from the film “American Psycho”.

Allen does well as a cold and psychotic assassin, sort of the antithesis of James Bond, but keeping the controlled-sexy appeal. Davis’ work ends up in a gory stand-off, with the anti-hero walking off with a one-dimensional blond bombshell who’d been eying him the whole night. The faint message seems to be sociological: could a killer get away with murder much easier on Halloween, just because our norms are so unusual for that one day? Hmm. But still, “The Body” seems to be grasping for substance — it’s definitely entertaining, but at festivals like Tribeca, the highest quality is found in those films that strike a neat balance. Stories that totally absorb our attention and also have us pondering big STUFF after the fact. They are truly cinematic and rare.

Director Gareth Dunnet-Alcocer’s “Contrapelo” is one of those rare films, and a key highlight from the shorts at the festival. The filmmaker, who cowrote the film with Liska Ostojic, manages to blend style with substance and a powerful story — a Mexican barber is forced to shave a dangerous cartel boss, a man who he has the power to kill with a flick of his blade and who he despises morally, but who ultimately becomes relatable and human. Beautifully shot by Carolina Costa, “Contrapelo” feels very worldly, despite only having two locations. Those locations are barber shop, and a drug cartel hideout, both of which feel very inhabited. Shot on a digital camera, but with older anamorphic lenses that give an antiquity to the atmosphere, the world of the film feels real and powerful. Kudos to everyone involved, between the set design, acting, directing, filming and the sound design — every bit of stubble being shaved is heard, adding to the hand made feel of the production. 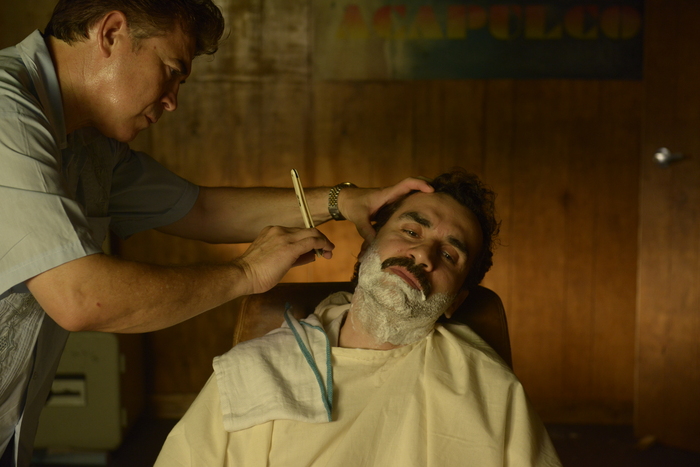 Other shorts at the festival focused on an awareness of technology, such as director and writer Alexander Berman’s “APP”. That film, about a geeky man who creates a phone application to help pick up women, was one of several centered on modern society. The Digital Dilemma program, including films such as “A Film is a Film is a Film” delved into the future of physical film. Now that digital cameras, filmmaking and theater projecting is more cost effective, people such as Eva von Schweinitz, the director of that documentary and a projectionist, are experiencing drastic changes in their professional lives. Digital Dilemma featured several experimental films that played around with the core of the physical medium, a highlight being “Acetate Diary” by Russell Sheaffer, which depicts hundreds of images of a meticulously painted film reel — like a series of abstract paintings.

As for festival winners, “The Phone Call” directed by Mat Kirkby was a clear standout as Best Narrative Short. Starring Golden Globe winner Sally Hawkins (“Blue Jasmine”) the film is about a rather shy woman who works for a helpline call center — a place where suicidal folks vent their concerns in desperate times. Part of the the Handle with Care Program, it’s definitely a delicate film, as Hawkin’s character speaks with a man (Jim Broadbent) who has taken just the right amount of pills to kill you, won’t reveal his location and just wants someone to speak to in his final moments. There is a raw intensity here, mostly in one location for more than 21 minutes, that is sad and seductive all at once.

Attending the Tribeca Film Festival is rewarding for several reasons. Firstly, one feels like they are on the front lines of filmmaking. Fresh ideas, especially compacted into short films shed new light to an industry that is over saturated with multimillion dollar productions. Secondly, Chelsea Bow Tie Cinemas has some pretty damn comfortable seats.