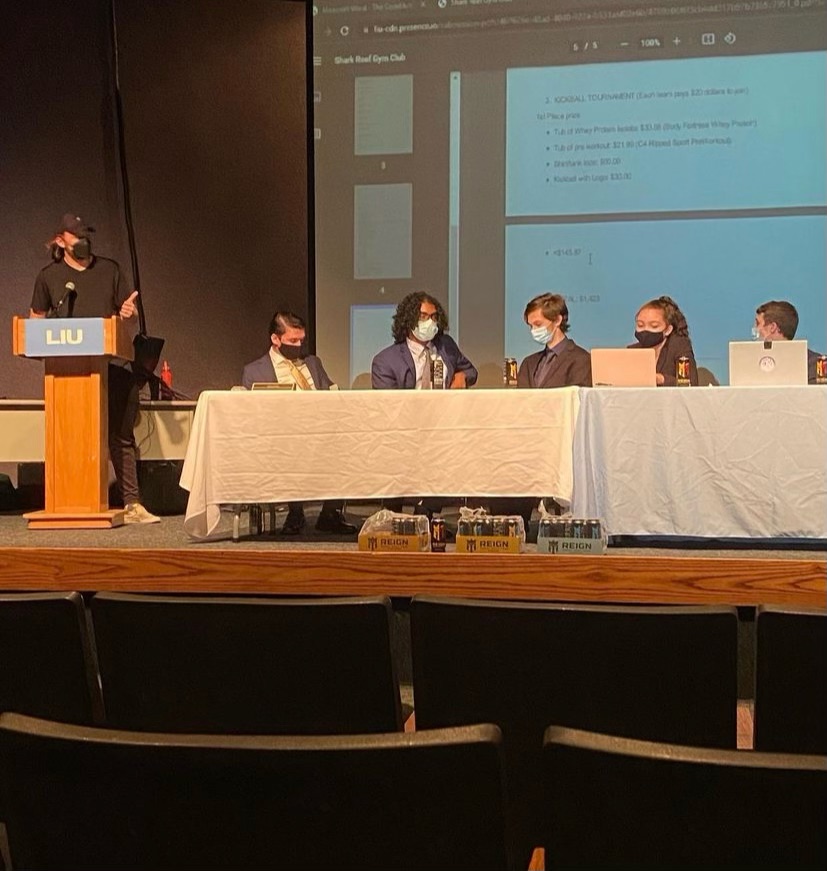 SGA plans to be the voice of the student body

After spending almost an entire school year virtually on Zoom, this year’s student government association (SGA) is working towards an enjoyable 2021-2022 school year for students.

Many students stayed home due to the coronavirus pandemic and social distancing guidelines, so this school year is imperative for students yearning for a fun year that is in-person again. The SGA is hard at work making improvements for a better college experience this year.

The SGA president is senior business major Robert LaPollo. LaPollo spent his days at home until being active in Greek life and student government, which prompted him to become more involved on campus. He grew more interested by participating in Greek life, which led to his involvement in other areas. “I walk around campus and see things that need to be changed, I hear from my peers, and it’s really cool to be able to do that and be in a position where you can have those conversations with the right people and make that impact,” LaPollo said.

LaPollo has held various leadership positions, so taking on the role of SGA president was not unusual for him. He has previous parliamentary leadership experience at Phi Sigma Kappa, where he is currently vice president, which led to him running for SGA president.

As president, LaPollo is prepared to address several concerns of students on campus.

The first issue that SGA worked to resolve was the reopening of the Pratt recreation facility.

“People pay a lot of money to be here, and they believe they have the right to use the gym, and we (SGA) agree,” LaPollo said. The virus’s spreading has been significantly reduced since last year; however, the gym was only accessible to student-athletes during a planned lift. At the same time, the nearest gym outside of school is 30 minutes away. Many students have expressed their annoyance with the gym being closed. Therefore, LaPollo has had daily talks with the university to resolve this issue on campus. The fitness facility has finally opened to all students on campus as of Thursday, Oct. 7. Students can now access the gym Monday through Thursday from 3 p.m. to 10 p.m., Friday from 4 p.m. to 10 p.m. and Saturday and Sundays from 11 a.m. to 7 p.m..

The next priority for SGA is to improve the food quality at Winnick Dining Hall. With a lack of dining alternatives on and near campus, students believe that the dining quality at Winnick and Hillwood needs to improve. Students have also voiced dissatisfaction with the food not being properly cooked, the lack of options and the limited hours. SGA is collaborating with AIRMARK and the administration to achieve better food quality. As Winnick closes as early as 8:00 p.m. on Fridays and Saturdays, SGA is seeking to expand the hours the dining hall is open because they recognize students’ schedules differ significantly.

Aside from SGA campus goals, LaPollo has a few personal goals he hopes to achieve as president. He is excited to become more involved with everyone on campus.

“My main goal on campus is getting students to understand what we do and getting them to understand we have the ability to make a difference and we are always here to represent them,” LaPollo said. He intends to accomplish this goal by engaging in one-on-one talks with students. In addition, he wants to build relationships with other clubs on campus, notably The Tide.

SGA intends to have a “meet the SGA event” at The Shark Bite, where students can meet members of the student government. Furthermore, students will have the opportunity to ask the SGA any questions they may have regarding campus life, or voice any concerns they have.

SGA also wants to hold a student awards event next semester. Students on campus would contact SGA and nominate students who they feel deserve recognition for their contributions to the campus. This event has never been done before, and it is in the planning stages.

SGA is an organization that wants students to know they can count on them to be the voice of the students. They would love nothing more than to serve as the student’s connection with the school.

“People used to come to SGA for their concerns and problems in the past, but access is becoming more and more difficult now that we are back in person,” LaPollo said. “We want to let everyone know that if you have an issue or a need, please come to us [SGA].”

If students have any concerns or issues they want to address, or want to become involved in organization, email SGA at post/sga@my.liu.

Published in Features and News