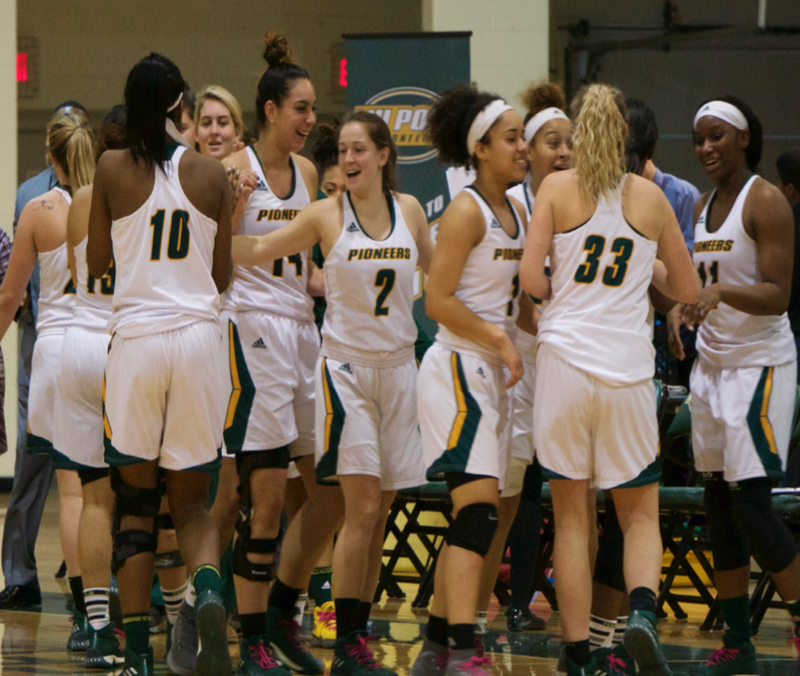 On Saturday, Feb. 17, the women’s basketball team went up against St. Thomas Aquinas College, holding onto a five game winning streak before the game and a first place spot in the East Coast Conference.

St. Thomas started the game hot, taking an 8-3 lead with under four and a half minutes into the game. However, after strong offense coming from senior forward, political science major, Sasha Patterson, the Pioneers were able to bring the game back together. Sophomore forward, broadcasting major, Mikaiya Moore was getting it done from inside the paint too, by converting on a layup and a close jump shot. Junior guard, computer science major, Shannon Doyle added to the first half score with a total of nine points and one assist. Senior broadcasting major and journalism minor, Kylie Garrett tacked on another nine points in just eight minutes.

The second half was even better than the first for the Pioneers. They recorded eight points in less than three and a half minutes. However, with one minute left in the second half, St. Thomas was able to cut the Pioneers’ lead down to six points, but fortunately for the Pioneers, it wasn’t enough. The game ended with a score of 77-66. With that win, the Pioneers are now ranked first overall in the ECC. The team holds onto an undefeated record of 9-0 within the conference.

The next game for the Pioneers will be against Daemen College at home on Friday, Feb. 23 at 5 p.m. for Senior Day, Honoring Garrett, Naya Williams and Patterson. This game will also be their second to last game of the season. The Pioneers’ final game will be at home against Roberts Wesleyan College on Sunday, Feb. 25 at 1:30 p.m.