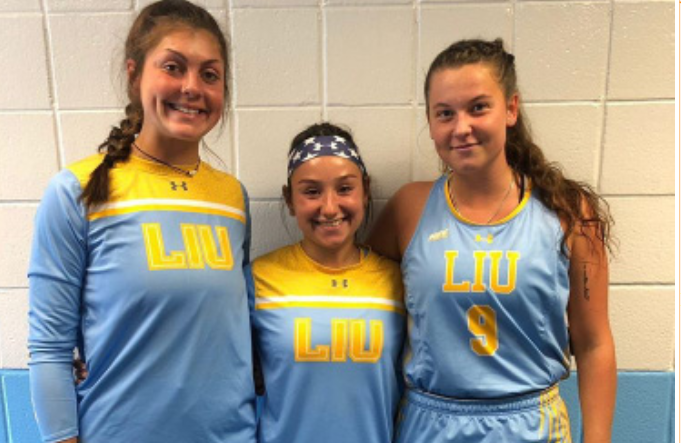 Athlete of the Week: Sammy Bell

Sammy Bell, junior psychology major, is a forward on the field hockey team, as well as the team’s leading scorer. During her time playing as a Shark for the fall 2019 season, Bell scored nine goals and 20 points throughout the 14 games the team played.

Bell hails from Scotland and started playing field hockey there when she was seven years old. After playing field hockey in high school, Bell decided to attend college in America and chose LIU after Head Coach Raenee Savin got in contact with her. “Coach Savin reached out to me and I had never been to America before so I was very excited,” she said.

Bell played the previous two seasons with the Post Pioneers. As a freshman in 2017, she co-lead the team in assists, and along with 11 goals, she finished third on the team’s scoring list with 35 points. In 2018, Bell was second in all three categories with 16 goals, seven assists, and 39 points.

Bell had a slow start to this season, but between Sunday, Oct. 13 and Friday, Oct. 25, she scored six goals in four games, including an overtime goal against Sacred Heart University, her second that day. Bell said the reason for her recent success is due to her team. “They have been hyping me up and playing better to win and want me to do well,” she said. Bell has also taken 62 out of the team’s 155 shots this season. She thanks senior midfielder and team captain Taylor Brodsky for that statistics. “Taylor is the reason I have many shots, as she is able to set me up for good scoring opportunities,” she said.

Brodsky predicts Bell will have a big impact in the upcoming games. “She’s a big part of our team and we rely on her a lot,” she said. Bell is a great player with a humble attitude, but she needs pushing from her captain, according to Brodsky. “She needs to be pushed a lot but she is a very humble player and it’s been an honor to play with such a good field hockey player, and especially to be the person that pushes her every day,” she said.

Junior goalkeeper Rachel Vellis is one of Bell’s close friends and said that she loves to see her score. “She is my best friend and gets me really hyped up. It gets me excited when I hear the echo from the other side of the field,” Vellis said. She also said that Bell is a strong presence on the field and brings a lot of energy.

Coach Savin has coached Bell for three years and said she has seen her develop from a freshman who wasn’t prepared for the amount of conditioning collegiate field hockey requires, to one of the team’s most valuable players. “The summer after her freshman year, she made a huge adjustment, which helped prepare her for the great season that she had last year,” Savin said. “Sammy has been a huge asset for our team and we need her to keep putting the ball in the back of the net because very often we come out on top when she’s scoring.”

Going forward, Bell and the field hockey team play their last games of the regular season on Friday, Nov. 1, against Fairfield University and on Sunday, Nov. 3, against Temple University. The Sharks will then prepare for the NEC Tournament since the team secured a spot in the playoffs with a 1-0 win over Bryant University on Sunday Oct. 27. They are the first Shark team of the new Division I program to claim a playoff berth. The NEC championship tournament is being hosted in Staten Island at Wagner University on Friday, Nov. 8 and Sunday, Nov. 10.