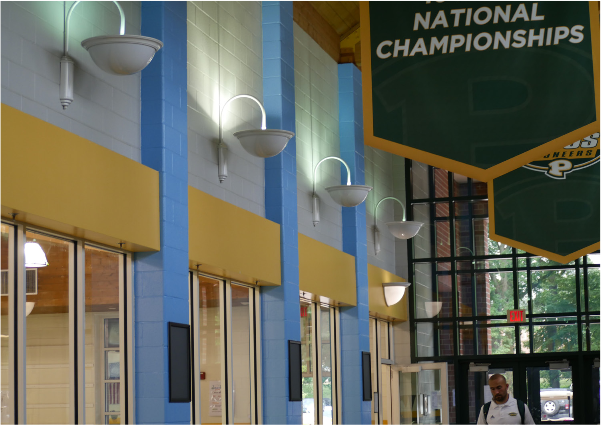 Renovations are happening on campus to correlate with the new mascot and school colors, and returning students and staff have been talking about them since the start of the fall 2019 semester. These gradual alterations have some students questioning when the university intends to invest in areas in need of updates and improvements.

When LIU announced it was merging Post and Brooklyn’s athletic departments in October 2018, students and faculty felt mixed emotions about the changes involved.

“On the athletic Division I side, you see we changed our colors, director of facilities, Roy Fergus, said, “We used to be the LIU Pioneers here in Brookville and the LIU Blackbirds in Brooklyn, but now we’re the LIU Sharks,” he said.

Those who returned to the Brookville campus after summer break, walked into a school which appeared to be confused about its color scheme.

“Since we’re rebranding, all the green was throwing that off. So, it’s a good thing that we’re getting the new colors to bring up everyone’s spirits,” said Isabella Lebrun, a freshman sports management major. She’s fond of the new colors but feels the school could have chosen wiser ways to spend students’ tuition.

Fergus explained the changes as “a strategic approach” for “One LIU,” as the school transforms from a liberal arts university to a teaching and research university. What students and faculty witness over time is the updating of facilities, according to Fergus. An example of an update is the repainting of all the doors in a building to university blue. “A lot of green has come and gone, so that’s what I meant by a refurbish or updating of the space.”

Lebrun, who lives on campus, visited the upperclassmen dorms and noticed a difference in their condition compared to her resident hall. “I feel like some of the money should be going back into the dorms, especially the freshmen dorms,” she said. “The freshmen dorm bathrooms have cracked ceilings and I feel like that could be handled better.”

Upkeep of the dorms is “part of operations,” according to Fergus, and “those kinds of things will continue as normal. There are fifty-five buildings on campus and Fergus expressed that going through all the facilities one by one to make sure they are working properly can take a lot of time. “If you see something, please let us know because safety is absolutely paramount to us,” he said. “Send us a request, because in general, we can’t be everywhere at once.”

Dining choices on campus is a matter in which Jeff Litzko, a freshman communications major, expressed his discontent. He enjoys the brighter atmosphere created by the new blue and gold accents, but agreed that the money should have been spent elsewhere like food services.

“I really don’t care for Bamboo or any of the food here” he said. “I think some other college campuses have McDonald’s on campus, or some places to hang out, which is something that I don’t really see here.”

Litzko is a commuter, so he isn’t largely familiar with the resident halls on campus, but the one time he did spend the night in one of the dorm buildings, his experience was less than satisfactory.

“It was horrible. There was no air-conditioning. The dorm [walls] have white cinder blocks; it’s gross. I feel like the money should be going to where the kids live on campus and revitalize the dorms a little bit; just redo things the kids actually care about,” he said.

As much as some students wish to see other areas acknowledged, many don’t oppose the changes already in place. Griffin Jusko, a freshman finance major, was also pleased with the new colors, rather than the old green and gold, but thinks the school has a long way to go.

“I feel like if the money was put more into the classrooms, to update them, they would be less gloomy and boring. A lot of them are from the late 1990s,” he said. Jusko isn’t the first to have noticed the outdated atmosphere in many of the older buildings.

“We are transforming in a way that is meant to be really helpful to students,” Fergus said. “It also puts us in this part of a higher learning echo system at a leadership level.” He reminded students that even if it’s something small, bring the issue to facility services’ attention. “Let us know so we can deal with it as quickly as possible.”