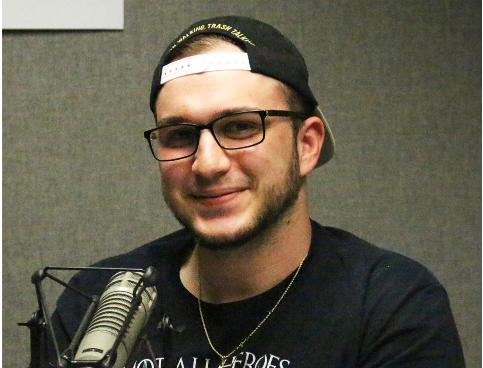 After six years, three majors, and three colleges, Christian “Klim” Klimaszewski will graduate this spring 2019 with a BFA in Broadcasting.

“It feels surreal and really satisfying that I’m finally graduating college,” Klimaszewski said. He began his college journey at Western New England University in Springfield, Mass., where he spent one semester as a sports management major.

Klimaszewski transferred to Nassau Community College as a physical education major for two and a half years before he made a final move to Post in fall 2016. At Post, he continued studying physical education and joined Greek Life as a member of Sigma Alpha Epsilon (SAE). After almost three years, Klimaszewski was sure he was going down the right path. Yet the end of his path will lead him across a stage to receive a diploma for a BFA in Broadcasting, not in .

“Radio was always something I wanted to do, but I figured it was something I could do as a hobby,” he said. It was his SAE big brother Greg Vavrinec who convinced him to join WCWP, the campus radio station, in February 2017. “I fell in love with it ever since then.

“I knew he was a sports guy, so I brought him around to help me with a project and he just gravitated to the station,” said Vavrinec, who graduated in spring 2018. Klimaszewski was a natural and got involved at the station immediately as a member of the sports department. “He has a bright future ahead of him and it’s truly a privilege to be friends, and more importantly, brothers,” Vavrinec said.

Senior year is the first time he’s taken 18 credits a semester, during both the fall and spring, which he needed to complete in order to graduate. But Klimaszewski said the pressure was no sweat. “Last semester, I actually did really well. I had a 3.3 GPA, and I’m still managing to do that now with all that I’m doing,” he said.

From participating in philanthropic events with to being a commentator for the Pioneers’ lacrosse, football and baseball games for WCWP Sports, reporting on campus news and events for The Pioneer, and co-hosting the Friday 2 p.m. podcast “Phenomenal Forum,” Klimaszewski has left his mark at Post.

Klimaszewski’s extracurriculars helped shape where he sees himself in 10 or 15 years. His dream is to get a job on the air with his own sports radio show on ESPN, WFAM, or the sports and pop culture blog, Barstool Sports. No matter how high the dream is, Klimaszewski is willing to start low and climb his way up to the top. “I’ve come to the conclusion that I’m willing to travel wherever I have to go to make this dream come true, whether it’s Georgia, Virginia, the Carolinas – anything like that,” he said.

His summer plans are still open, but his next steps are to search for entry-level jobs at media companies like NBC, CBS, WFAM, and ESPN. He is looking for open positions as an assistant producer or a writer

to the end of the 2018-2019 school year, Klimaszewski can proudly look back with no regrets. He’s learned many life lessons from finding his footing in academia, attending community college, and facing some personal challenges. “It’s helped me build who I am today,” he said. “I look at all of this stuff I’ve been through and no regrets – no regrets at all in my life.”