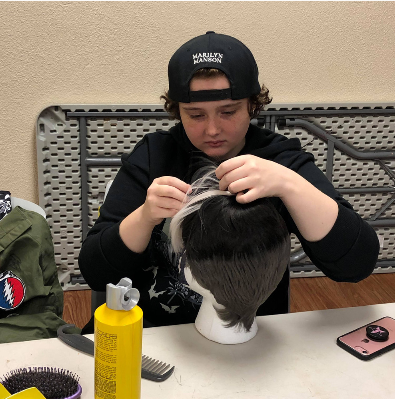 The art of cosplay has been growing in popularity in recent years, and has been forming a community that has united pop culture fans all over the world. A small piece of that community has made its way to campus with the formation of the Cosplay Club.

Cosplay is when fans wear costumes to portray their favorite characters from works of fiction. The hobby has become popular within recent years, and has been the cornerstone of many pop culture events.

The idea for the club came when Theresa Roselle, a sophomore game design major and current club president, noticed how beautiful the campus was and wished she could use the grounds to do a photoshoot. At the time she already knew several students who were interested in cosplay, but didn’t want to dress up on campus. This gave her the idea to create a space where students could feel comfortable cosplaying and meet with others who enjoy the activity as well.

Weekly club meetings consist of workshopping sessions, where students are able to work on their costumes with the help of their peers. Members have a place to relax and share their passion for the hobby. “It’s therapeutic in a way, it’s like for a second you get to become your favorite character,” said Lyle Bauer, a freshman communications major.

The Cosplay Club isn’t content with being a normal club, they want to create a community around cosplay. Beyond just appealing to students with an interest in the hobby, they also want to connect with students of all kinds by collaborating with other clubs during events. “Our goal is to have everybody on this campus connected to cosplay in some type of way,” Roselle said.

In addition to helping clubs with events, they also plan on hosting a few of their own as well. The first event planned is a slumber party on campus. The event is currently being planned for sometime between the end of classes and finals, to allow students to destress and unwind from the demands of coursework.

Charity work is also an interest that the Cosplay Club would like to pursue. The Cosplay Toy Drive is currently an event members are planning for the holiday season, where they would distribute toys to children in need while dressed as Santa’s elves. The club hopes to create a positive impact, both on and off campus, through cosplay.

“We would like to be able to bring a light into the darkness of the world,” Jessica Pulizzotto, a sophmore digital arts major and vice president of the club, said. One example of this would be a member dressing up as Spider-Man and giving a Christmas gift to a kid to show that there is good in the world, and a way to build a community where people help each other out.

Meetings are held every Thursday during common hour in Hillwood Commons room 221. Roselle encourages students to come to Cosplay Club if they want to have fun and “create something that you can be proud of and that you want other people to be proud of.”