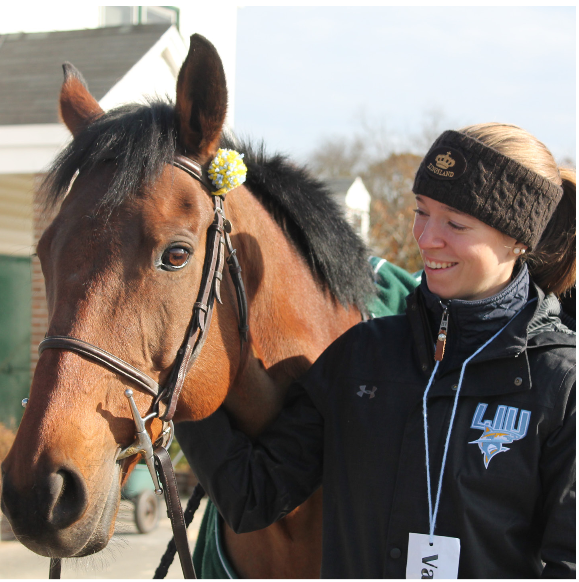 The equestrian team finished as the high-point team for the fifth time during the fall 2019 season when they hosted a show on Sunday, Nov. 10, at the North Shore Equestrian Center.

The day started with the flat class where 14 riders earned first place in the open, intermediate, limit and pre-novice divisions. During the afternoon, the riders competed in the over fences phase where nine riders placed first in the open, intermediate and limit divisions. “I’m extremely proud of how my girls worked together. It was our best home show to date,” Head Coach Brooke Chasin said about her team’s performance.

Among the riders who won their classes was senior digital arts and design major Alex Daskam, who placed first in both her open flat section and in the open over fences class.

“I’m very happy with my performance. I couldn’t have asked for a better way to end my last home show here at LIU,” she said.

Daskam said a contributing factor to her success during Sunday’s show was that she got to ride on the same horse for both her classes. The riders who compete don’t know which horses they will compete with until the day of the show, where a “horse draw” is conducted. At the draw, every rider randomly draws a horse for each of their classes. “I was lucky enough to pull Ivan for both my flat class and jumping class. It’s rare to pull the same horse for both, but it’s definitely an advantage when it does happen,” she said.

Senior nutrition major Hedda Walltott also had a successful day, earning first place in her first competition in the open flat class, but un-like Daskam, she wasn’t as lucky in the horse draw. For her over fences class in the afternoon, she drew a horse she wasn’t used to and didn’t manage to reach the podium. “I prefer the hotter horses, where I’d rather have to hold back, than the horse that I got where you have to really push and move forward,” she said. “I find that difficult, but I’m still happy with how I did, it’s just that the result didn’t come out the way I wanted.”

This Sunday was the team’s only home show during the year. being able to ride their own horses is a huge benefit of being at home. When they compete at other schools, they compete with the host’s horses. “The advantage is that we know all of the horses, so as a team, we are able to know pretty much exactly how each horse will go in the flat or over fences,” junior biology major Mackenzie Ashe said. Ashe earned second place in the over fences class. “I was so excited to be able to pull one of my favorite horses, Babouche, to jump yesterday. He is one of the most fun horses to jump, so I had no fear walking into the ring,” she said.

Hosting a show can be stressful when you need to think of your own performance and the logistics of the event at the same time. “At other shows, all we have to worry about is our team. We don’t have to worry about taking care of horses, figuring out appropriate equipment for each horse, and making sure each horse is ready for every class that they are in,” Daskam said.

However, all three riders said they are happy with how the team managed to get everything to work together during the event. “There was so much team spirit and togetherness,” Ashe said.

“The show ran so smoothly and I couldn’t be happier with how the team helped each other to make the show run as successful as it did.”The team finished as the high point team in every show this season and during Sunday’s show, ending with a perfect point card. “We have a very good team spirit this year. We are a great group of girls,” Walltott said. “We are all very talented and everyone’s efforts contributes to our results.”The three riders said their coaches play a big role in their positive development as athletes and as a team. “We couldn’t ask for better coaches to make our team strong and continuously succeed,” Ashe said.

The Sharks have one show left in their fall season, set for Sunday, Nov. 17 at the Olde Towne Equestrian Center in Selden, N.Y., before they take a break from competitions.

The team begins their spring season on Sunday, Feb. 9 at the Jamaica Bay Equestrian Center in Brooklyn, N.Y. The team’s goal for the spring is to keep their winning streak and qualify for regional and national competitions.