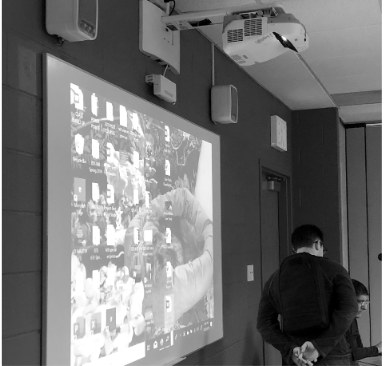 SMART boards have been an undeniable advantage to most professors, enabling them to engage in new and more meaningful ways of teaching than whiteboards and chalkboards ever did. The acronym stands for “Self-Monitoring, Analysis and Reporting Technology,” but at times, these interactive technologies are more trouble than they’re worth.

As campuses enter the age of information, it’s important for professors to become familiar with the technology involved in a “smart classroom.” SMART Learning software allows teachers to transform their content into an interactive experience, including lesson delivery, collaborative workspaces and learning activities. It’s beneficial to the classroom experience – until it becomes a timely headache, taking time away from a planned lesson.

“I’ve been having issues with the touch functionality,” said Anke Grosskopf, associate professor of political science and international studies. “So whenever I call IT, they’re really good about fixing it again, but then it works for one class. When I get to the classroom again, it’s not working.”

SMART boards consist of three parts: the projector, the board, and a small camera mounted above the board. One of Grosskopf’s students told her the problem may be caused by another faculty member who was bothered by the board’s “trembling” parts each time he got too close to it, causing him to disconnect and disable the mechanism.“

In previous semesters, I’ve had issues where the plug from the projector to the camera was taken out every time I was in the room. So, what I suspect is happening is something kind of similar to that,” Grosskopf said. “It’s a question of who’s resetting it, and why and how.”

This may just be a case in which the technology doesn’t function in ways that people want or expect it to, according to Grosskopf. In many situations, professors take private action instead of contacting the IT department to see if the problem can be addressed in a more systematic manner.

“As with any technology, there are going to be problems from time to time,” Manju Prasad-Rao, head of the Instructional Media Center, said. If restarting the SMART board or SMART Notebook program doesn’t fix the problem, she recommends using the technology without its touch capabilities to avoid losing time. She also suggests visiting the SMART Exchange for lessons to use in the meantime.

In the past, Grosskopf asked the university for a computer with touch capability. She revamped all of her classes with slides that had a lot less pictures and visuals to make room for additional notes. When the school introduced the SMART board into the classrooms, she was already prepared to use it.

“It makes it more interactive for the students, and we can have different examples of questions or collect examples, or I [can] add additional information on the slides of what we’re doing,” Grosskopf said. She prefers the smart board over the dry erase board and chalkboard for many reasons. “One of the advantages it has for me: I’ll remember exactly where I was because that’s where my notes are.”

Some professors on campus don’t have SMART boards in their designated classrooms, while others choose to avoid it altogether. “Generally, l do not use SMART board technology because when it comes to technology, I’m not very smart,” said Michael Soupios, professor of political science.

Grosskopf said a lot of professors just use it to project the slideshow, so she understands why many don’t experience the same problems. Barbara Fowles, professor of communications and film, is one of the professors without access to a smart board.

“I do not have smart boards in my classrooms. I do have video hook-ups which I use all the time. This semester they have been working ok, generally. There are always issues with the audio, mostly horrible buzzing,” she said.

Part of the problem, according to Grosskopf, is that faculty doesn’t receive a lot of training in professional development, especially on how to use the projectors and what they’re capable of. They’re mostly left to figure it out on their own.

“I mean IT has been really great in resolving the issues that I’ve had very quickly,” she said. “Sometimes I’ve needed to go to the technology resource center and work with somebody there to help me work with IT to get things figured out when things just weren’t working.”

Until professional training is offered, professors will more than likely continue to avoid the smart boards all together. Prasad-Rao suggested professors ask their students to download the software application SMART Note-book, which enables students to make their own slides and lesson plans when a SMART board isn’t functional.