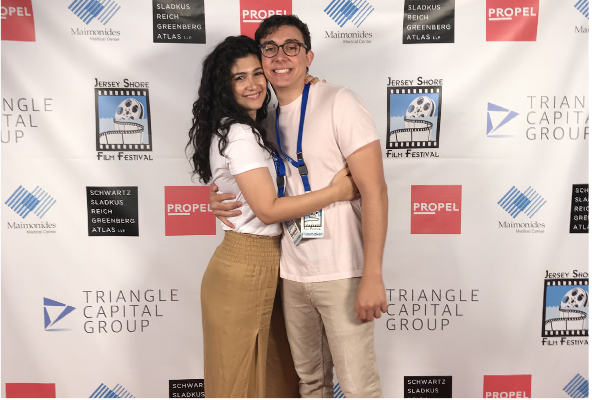 Two former students from the film department, Justin Portaro (‘18) and Kat Gueli, attended several film festivals over the summer and won a number of awards.

“We did one [film festival] in Texas called the 52nd Houston World Fest,” Portaro said. Participants submitted their original films in hopes of winning an award. , fewer films were screened. “Texas was about 4000 applicants then 300 awarded and 100 ” Portaro said. At this Portaro won the Gold Remi for his film “Kid, the Moon.”

“It’s cool because you get to network and meet different film makers in the field,” Gueli said about attending these festivals. “Festivals are a good way to network and have your film be seen by many different audiences.”

Another festival the two attended was the Jersey Shore Film Festival where they each one an award. Portaro won Best Director of a Short Film, Gueli won Best Drama Short for her film “Heart and Soul.”

The two spoke of how they got into film and pursuing the field. “I got an in photography, from [there] my friend asked me to film his short film, and from there I just kept going down that ” Portaro said. Starting as a fine arts major, he soon switched to film, “I do because I like being able to create something and share a story with people, it makes me feel good,” Portaro said

Gueli came from a performing arts background. “I was heavily involved in theater throughout my life, then in high I was asked to assist the director in the musical, and I fell in love with directing and connecting to people,” she said. She attributes her success to the professors who helped shape her college experience, including Suzan Zeig. “I love film because it gives me a purpose to feel everything that I do and experience and put it into work and make people connect to that something bigger than ” Gueli said.

Gueli mentioned another festival, the Long Island Film Expo. “You are with a lot of your peers, meeting people who are very local and could get easy access to work on your ” Gueli said. These types of festivals also exposed them to more professional work. “Being at a festival also allows you to see not just other student work but also people at all different levels so you learn from them and improve ” Portaro said.

The festivals themselves while having a similar setup are unique in the styles of art they present. “The Jersey Shore one was more indie and experimental, seeing my film there was with an audience that liked that type of film, so I got a unique response at that festival that I didn’t get at another ” Gueli said.

“Jersey Shore Film Festival so far is the best one I’ve been to; the people that were there were so nice and so humble and so in love with the art that was being shared at the festival, I left there thinking I was part of this unique ” Gueli said.

Professor Lisa Robinson came across some of the festivals Gueli and Portaro attended. “[She] gave us a list of festivals that she thought would work best for us,” Portaro said. Inspiration is an important part of creating films and can come from many places from personal relationships to books and movies.

“We see a lot of common themes, and it’s about taking those themes and making it personal to your own life experiences, and making it a little more intimate,” Gueli said.

“Both films are about a parent and their child. They’re completely different but they have the same connection,” Portaro said. Both his and Gueli’s films in the coming of age genre. “We love when characters are finding themselves; that’s kind of where we are now, transitioning between college and trying to figure out what our next chapter is, and we just gravitate towards those ” Gueli said.

Published in Arts and Entertainment and Social Media