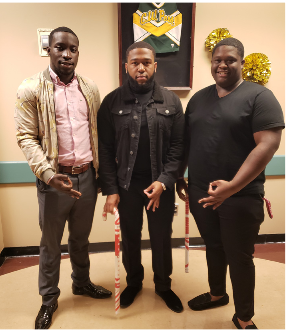 Fraternity Creates a Safe Space to Discuss Race and Gender

Many of the basic understandings Americans have about the society they live in are rooted in dated practices that are not widely questioned or changed, even when those understandings negatively impact specific groups of people. In a meeting on Wednesday, Oct. 30, members of the predominantly African-American fraternity Kappa Alpha Psi sought to address topics students could find difficult to talk about publicly or without a safe space.

Among the topics raised were double standards, racial inequality, and gender roles surrounding men and women. Both the president and vice president of the fraternity chapter prepared topics and scenarios for a crowd of more than a dozen attendees. Everyone who attended the event was black.

Attendees commented with their personal opinions on the matters discussed, from the perspectives of others in their respective gender. “I feel like everybody who has different perspectives will get another perspective on the topics, and you can see who is like-minded and who is not, and everyone can have a safe conversation about it,” senior graphic design major Jahrid Barker, president of LIU’s Kappa Alpha Psi chapter, said.

“Only black people would come to this, but I wish there were more people that would come of different races, so we could get another side instead of just male and female,” freshman forensic science major Tyran Williams said.

Michael Bruny, senior business and sports management double major and vice president of the fraternity chapter, brought up commonly recognized double standards and gender stereotypes in today’s society. This included women living as housewives and men working to be the breadwinners of a household.

“If we’re going to get [gender roles] eliminated, there’s a positive and negative to everything. If you’re going to eliminate them for women, you should eliminate them for men, too. But that’s also going to be extremely negative, in my opinion,” SUNY Old Westbury student Daniel Warren said. Several scenarios were presented throughout the discussion. Some included relationship dynamics between heteronormative couples, such as why men are more frequently held accountable for dumping women. “My takeaway is that men and women both have issues with the other, and both of them have valid points. So both should be able to speak their piece,” Warren said.

Another of these scenarios was how society deems it acceptable for a woman’s cleavage to be displayed on a public advertisement, but shameful for a woman to breastfeed her infant in public. One female student commented, “It’s because women are so oversexualized that nature seems unnatural.”

Mike Lowery, who also attends SUNY Old Westbury, felt American society mirrored what nature has deemed appropriate in terms of childcare where gender roles are concerned. “I feel as if women are expected to [care for their children], biologically through nature,” he said. “The father goes and provides for the child and the mother. When the father steps up to do the role of a mother, he is praised by society for that reason. But I do also see the issue where women who take care of children by themselves don’t get that same recognition.”

Attendees talked about matters of masculinity and femininity, such as whether men who express their emotions should be viewed as unmasculine or feminine. “I was raised to not show emotion because it looked less masculine, so I deal with a lot of stuff differently,” Terril Alexander, a graduate student studying criminal justice, said. “With emotions, I really tend to show none, even with losing loved ones.”

One question the members raised was whether the LGBTQ+ community is outpacing the black community in terms of movements for social equality. “The reason why we talk about race is because the LGBTQ+ community we see will get their agenda pushed forward before black people, and I pointed that out because LGBTQ+ people can still be white,” Warren said.

Talk of family matters also hinged on the topic of race. Several students at the discussion spoke of their Caribbean or Jamaican roots and households, while Williams talked about his experience growing up in Memphis Tenn. “That played into the talk today when we talked about how it’s seen as unmasculine to be gay, and how Caribbean people would disown them [family members],” Williams said. “That’s not really a thing where I’m from because most people just know that they’re black, they don’t know anything else. I thought that was really enlightening.”

“Race plays a factor [in creating a safe space] because if you see one black person talking about it, the next person will talk about it,” Barker said. “Race plays a role into what is said and how it’s said, but at the same time, it’s also the energy that the people who present [a discussion] bring to it.”

Regulating language and tone of voice are two things Barker considered important to creating a safe space. He previously gained experience in counseling from high school. “I worked side-by-side with my guidance counselor, so I got to see how she worked, and I helped her out with some situations,” he said.

Bruny also mediated the session. “My brother’s a counselor, he works for mental health counseling, and he’s a guidance counselor as well,” he said. “So I’ve sat in on some of his meetings and discussions just to get an idea of how things are run because these are touchy subjects.”

“It was good opening the questions, I like how everybody had their own opinions, and how everybody brought up personal experiences to get themselves more involved with the answers,” Alexander said. Barker hopes to continue this program so students can become more comfortable bringing up similarly sensitive topics in conversation.

The severity of matters including sexual assault allegations against men, specifically fraternity men, were also discussed at the event. Students largely agreed that the actions of one person do not define the characteristics of every member of the same group. “I feel like this will help people to [see] fraternities are not these bad guys who are committing sexual assaults, they’re actually trying to help and get people more aware,” Alexander said.

Going forward, Barker said students can expect a Kappa Week further into the academic year with a panel discussion covering similar topics to those discussed at this event.