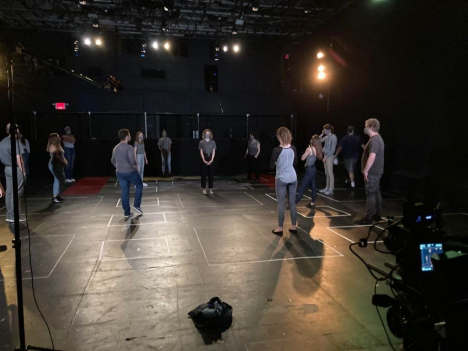 Live Theatre In The Time Of Covid

Editors Note – Zach Taber is a writer for The Pioneer

The great white way is at a standstill, with no new shows going up, and no long running shows being able to continue their legacy, Broadway is dark. During this difficult time, many theatre artists are out of a job and are attempting to find new ways to create.

Junior musical theatre major Zach Taber, attended “Jagged Little Pill” on Broadway during its last performance before the COVID- 19 pandemic caused Broadway to shut down. It wasn’t until the curtain closed that Taber learned that this was the last performance.

The uneasiness in their stomach started to rise.

Though the show helped to distract from the uneasiness of the air around them, it was still a bittersweet experience for Taber.

Broadway itself may not be able to continue throughout the pandemic, but that does not mean theatre artists around the country cannot continue to create. For many, theatre is their income, their way of life and a source of joy.

Directors and actors are adapting to a new way of performing, but it does not come without challenges. Hannah Ryan, the Resident Director of “Hamilton” on Broadway, is currently directing a production of “Roe” at Post. “Roe”  is based on the 1973 Roe V. Wade case legalizing abortion.

“These students and this subject matter, I didn’t want to miss the opportunity,” Ryan said.

Ryan came into this rehearsal process prepared to undergo challenges. She expected the pandemic to make in person rehearsals difficult as acting relies heavily on physical connection. Upon receiving the news that no audience members could be present during the performance, Ryan had to adjust her plans.

Ryan recounted her idea as a bookend approach to the play. She is excited to have a combination of in-person filmed segments wearing masks, and solo monologues filmed without masks.

“[We are using a] combination of Zoom, fully remote filming, getting filmed on your own, and in person, and the highest of quality studio filming,” Ryan said.

Sophomore musical theatre major Quinn Doyle is excited to be a part of “Roe.” He is playing Man 2, which is a combination of many characters that will appear throughout the play. Doyle has also been struggling with virtual rehearsals. “If I can do this, the rest will be a cakewalk,” Doyle said.

Doyle has chosen to have a positive outlook on the impact coronavirus has brought on theatre.

“[Masks and social distancing are] really cool in a way, and it’s becoming a challenge for all of us that we’ve never really had to face before,” Doyle said.

Ryan and Doyle agree that the show they are working on is rich in history and relevant right now. With the upcoming presidential election, and the recent passing of Ruth Bader Ginsburg, women’s rights are at the forefront of the discussion.

Due to social distancing, more time is allotted in rehearsals for dramaturgy work. This is when the director and actors sit down and talk about their characters, their history, and the historical background of the play.

Ryan uses the added time as much as she can. “[The cast] delves into the specificity of character, especially because so many of these characters are actual human beings from our history,” she said.

Usually, Ryan would only spend a day or two with her cast doing this type of work, but with her cast of “Roe,” she spent over a week.

On the West Coast, in Washington state Erin Murray directed a production of “Men On Boats” with social distancing guidelines as well. Murray dubbs herself a Femme Forward Theatre Maker and has created different types of theatre, from Shakespeare to new works, with people from all walks of life.

Murray has been acting since she was seven. “You start to get addicted to the collaboration and the creativity,” Murray said. When she was 20, Murray began to fall in love with directing, and she has been doing it ever since.

This past August, Murray directed a student production of “Men on Boats” written by Jaclyn Backhaus. A production not normally fit for social distancing, “Men On Boats” tells the story of ten explorers in four boats charting the course of the Colorado River in 1869.

She worked with Youth Theatre Northwest, a children’s theatre on Mercer Island, Washington. “There are two large fields on either side of the theatre, and the building itself has 5 large double doors that can remain open,” Murray said, describing how well the space works for social distancing. Although some may jump to suggest a digital performance, Murray said “There’s too much lag time and confusion with Zoom, it really is an ensemble piece.”

An in-person rehearsal process did not come without complications though. Murray recounted the numerous panic attacks she faced. “Even small complications seemed to be amplified into massive problems because of the stress everyone was under,” Murray said.

“Every 50 to 60 minutes I would need at least seven minutes to go outside to sit, relax and breathe,” Murrary said, and she would implore each of her cast members to do the exact same, hoping no one was too far in over their heads.

All of the trouble wasn’t for nothing though. Murray found beautiful moments with her cast members that she likely would never have experienced without the restrictions of the pandemic.

“The young actors had to learn how to take up more space on stage, it was asked of them from the characters,” Murray said. She was able to watch these young actors grow in ways that would not have occurred had there not been a pandemic. Much like Ryan and Doyle, Murray has chosen to find the silver lining during this time.

As for the future of theatre, all three agree that this pandemic will have a permanent impact on the art as they know it.

However Ryan is okay with that and finds it thrilling. She is aware of the new ways this pandemic has forced her to think. Ryan added animation to a piece she had been working on for a year, which is something that she never would have thought to add before.

Doyle sees a future where there won’t be a packed house which scares him but is something he’s coming to terms with. Murray agrees and hopes that these changes will lead to more inclusivity and a more diverse film lineup, with more Black Indigenous People of Color (BIPOC) and women artists dabbling in Zoom theatre.

With every day an opening date being pushed back, or a show being closed forever, it is important for artists to remind themselves why they do what they love, and why, truly, all of the struggles are worth it.