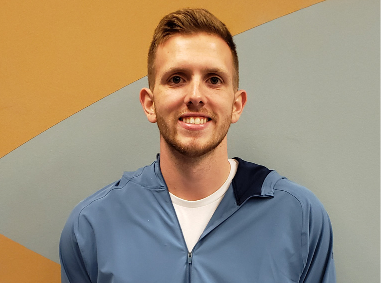 Matthew Sollenne, senior accounting major, has fond memories to look back on after he graduates in May. Having spent four years on the Pioneer football team as lineman, Sollenne considers the highlights of his college career to be the time spent bonding with his teammates.

“They’re all good guys. I’ve lived with and next to my teammates for the past four years so we’ve all gotten really close,” Sollenne said. He is a commuter student from Massapequa. “Winning two championship games was Sollenne’s proudest moment as a Pioneer. “It was amazing. Winning a regular football game is a feeling you can’t really describe,” he said. “And then for it to be a championship game just makes the feeling so much better.” During his sophomore year, Sollenne and the team celebrated a 43-23 victory over Assumption College. In the 2018 season, the Pioneers won 17-13 against New Haven University.

Sollenne has taken part of several community service events including food drives at a local high school and food kitchens. “We did a lot of help with physically and mentally challenged people like bowling leagues, little things here and there,” Sollenne said.

The Pioneer relies on a circulation manager to deliver copies of the paper around the campus, a job Sollenne has done for three years. “Every Wednesday morning, I pick up the newspapers and I deliver them to different buildings around campus before class starts and before people are really on campus,” Sollenne said. He gets up as early as 6:30 a.m. to start this routine. Sollenne looks forward to having no more classes once he graduates. “Not having a job, I’m not ready for that,” Sollenne said. “Having a steady income would be nice.” He is currently looking for jobs in the Philadelphia area and plans to work in accounting.