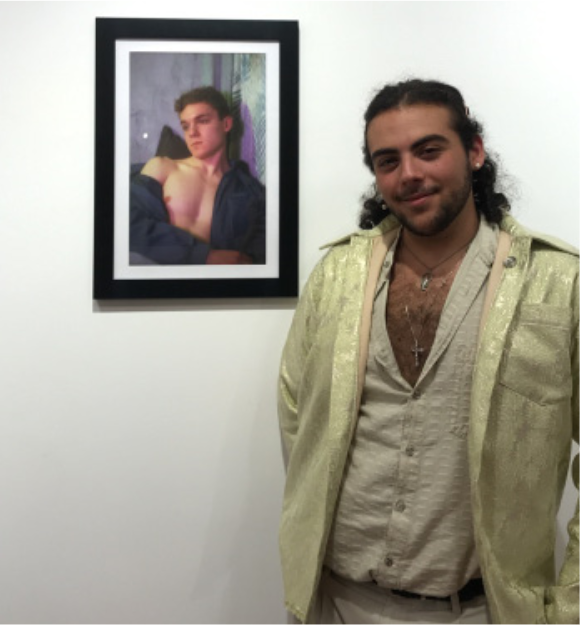 Men through a Man’s Lense

Select students get the opportunity to showcase their artwork in the SAL gallery. Junior photography major Michael DeCristo received this opportunity from Sept. 16 to Sept. 20. A reception for DeCristo’s exhibition “Manmade,” was held on Sept. 18 from 5-8 p.m.

Shot through a 35mm film, DeCristo captured images of men from his past. “Growing up, I felt really separated from the male population. I grew up in a rural area in North Carolina and I’m very outwardly queer,” DeCristo said. The portraits he produced “required [his] subjects…to trust [him] as a queer artist to depict them,” he said

Raymond DeCristo, DeCristo’s father, mentioned that the pictures shot “are photos that challenge your value system in the world.”

In each shoot, DeCristo had a specific focus in mind. He wanted his subjects to “not confront the viewer.” “I wanted the viewer to just be able to gaze upon the man without any confrontation with that eye contact,” DeCristo said. His favorite piece, “The Roommate,” highlighted this basis.

Although DeCristo has been involved in many group shows, this was his first solo art exhibition.

Difficulties came with hosting a solo exhibition. “It’s all up to me to pull people,” DeCristo said. He can’t rely on other artists in a show to bring in audience members. Despite the difficulties, DeCristo said, “I really like that I have my own space to share my ideas and my imagery with people without compromise.” It also gives him the chance to show off unapologetically

The entire collection was almost a year in the making. From Oct. 2018 to July 2019, DeCristo dedicated his time to each individual photoshoot. He explained that the process of choosing which pictures to showcase was difficult, but he trusted his intuition in choosing the shots that he did

His self-portrait was the most shoot. DeCristo crafted a room filled with his own artwork using a process known as cyanotype. The process took approximately two months to complete and is a favorite of many of his friends. “I’m so proud of how far he’s come as an artist. All of the things he’s been freaking out over, I’m so excited to see him finally reap the rewards,” junior dance ma-jor Rachel Frye said. DeChristo’s self-portrait is her favorite piece in the collection.

The exhibition was just a start for DeCristo. His dream is to branch out and sell his work to customers. “[I want] people to care enough to sponsor me,” DeCristo said. He said he can’t imagine himself doing anything else. Later down the road, he hopes to possibly become a professor relating in the field of photography.