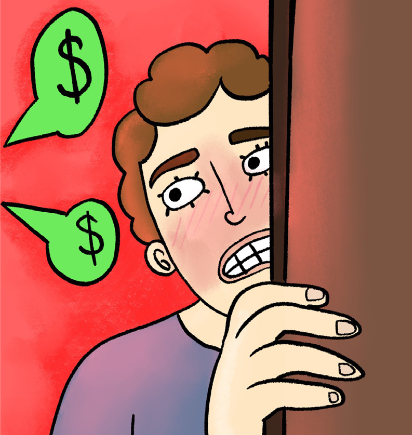 Some resident students have growing concerns about privacy and monetary fines after resident assistants informed them of surveillance cameras monitoring their use of restricted side entrances and exits.

RAs notified residents during a mandatory meeting at the start of the fall semester that use of the side doors is restricted during certain hours of the day. Consequences related to their misuse was also discussed, which includes a write up or a costly fine, according to RAs. “No residents should enter the side doors ever,” Louis Copertino, a Riggs Hall RA and senior public relations major, said.

But, returning campus residents already know what it’s like to approach a side door and hear an RA give warning that the side doors are off limits; however, some students residing in Brookville Hall were surprised to learn that surveillance cameras monitoring the side doors may have facial recognition.

Riggs Hall resident and junior criminal justice major, Abby Timmins, said an advanced surveillance system is a good idea if the residence halls experienced a high volume of break-ins, but that isn’t the case. “They’re now just there to deter people from using the side door, which they’re going to do anyways,” she said. “A smarter idea would’ve been to move the front [entrance] of Brookville to the side where all the cars are parked,” Timmins suggested. “That way, it’s more convenient and safer for students.”

Considering the dorms are where students shower, many residents havebecome suspect about camera locations inside the building. “I think that they’re important. I don’t want to look at it as an invasion of privacy rather than keeping the building safer. Looking at it as an invasion of privacy is definitely interesting. That’s something that I’ve never thought of. I do see how it can be perceived that way,” Copertino said.

Other residents are somewhat understanding of the matter. Cara Kennedy, a senior speech pathology major who lived in Queens, Brookville and Post Halls prior to moving off campus, said she doesn’t see it as an invasion of privacy.

“If I’m gonna walk outside in the hall in my towel to go shower, then that’s my choice. There’s a possibility someone will see me. So, if a camera sees me too, that’s expected,” she said.

As far as facial recognition capability, Copertino said that he’s never heard about it. “There are cameras in Brookville and they can see people’s faces and they’re just there for the protection of students and safety of the building,” he said.

Brookville Hall, which is known to house upperclassmen and athletes, grew itself a wild reputation over the years, according to junior criminal justice major, Ben Perez, who is one of the RA’s in the building. He said from what he’s been told, Brookville cameras have facial recognition capability.

Many attribute the hall’s supposed, advanced surveillance to its rowdiness, but Perez disagrees. “Being a part of this community, and being here everyday, it’s really not bad and the people are great,” he said.

Although, many residents state they weren’t aware of the advanced technology, Perez said, “there’s notes in front of the side door, clearly presented, that show ‘don’t go out the side door. There’s facial recognition cameras.’”

One Brookville resident recalls her RA mentioning that the cameras can recognize a student’s face when exiting the building. “I was shocked. Honestly, didn’t think the school would take it that far; doesn’t really freak me out too much, though. It might be helpful. If something bad happens to one student by another student, they have a picture of it,” said Alexandra Holdridge, a sophomore accounting major.

Despite the written warning on the doors, public safety denies the technology exists. “None of the cameras on campus have facial recognition,” said Michael Fevola, university director of public safety. He also confirmed that cameras are located on the first floor of each dorm, the laundry rooms and on the outside of the buildings. “The public safety base is the only location on campus with access to view the cameras in real time. RAs do not have any access to view cameras at all,” he said.

RAs who catch students using the side doors must report the incident to the resident director who then contacts public safety and later issues the fines, according to Kaitlyn Klein, a senior who is double majoring in forensic science and criminal justice. She was an RA in Post Hall and the South Residence Complex before she moved off campus.

Students like Holdridge and Kennedy have heard conflicting information regarding how much it will cost a student if they’re caught breaking the side door rules. “The RA said $25 but I’ve heard $50 from other people,” Holdridge said. Perez claims violators will receive a $25 fine regardless of what hall they live in, and Copertino said the fine is $50. Sophomore international business major Calah Turpin, who is currently an RA in Post Hall, said the fines range anywhere from $50 to $100, and she believes the amount is based on how many times a student was caught.

Kennedy said she doesn’t believe the cameras were ever on while she was living on campus.

“Every time someone entered through the side door, they didn’t know who did it because they didn’t have them on. No one has ever been fined,” she said. But Klein, the former Post Hall & SRC RA, confirmed they always worked. “That’s how we got documentations on the side doors,” she said. “[The fine] was $25. I believe it was $50 for code sharing of your dorm room which is where I think people have been getting $50 from.

”All discipline related to dorm violations is mediated by the Executive Dean of Students, Michael Berthel, according to Fevola. Rules regarding unauthorized exit/entry of a building, as per the university Code of Conduct, can be found on line at liu.edu/Post/Campus-Life, according to Jean Ann Smith, Associate Dean of Students. “All of our community members are encouraged to play an active role in the safety of our student body, residential and commuters alike,” she said. The Code of Conduct, however, fails to clarify the amount of the fine.

Berthel backed up Fevola’s response about existing cameras: “Cameras are used through-out campus to ensure the safety of all students, faculty, staff and visitors. These cameras do not have facial recognition software. Public Safety is always evaluating the need for additional cameras throughout campus, including residence halls.” Berthel said.