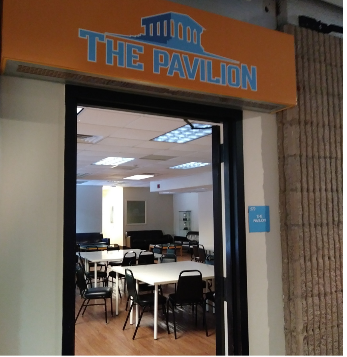 With the new semester comes new changes to the student center, Hillwood Commons. From office relocations and new to colors and businesses, there is a wide range of things for returning students to get used to.

The business Hutton and Post has been replaced with a new apparel store, Shark Nation, that sells merchandise depicting the new campus mascot, the Sharks. It is the updated version of Pioneer Nation.

“We’re pretty confident that people are going to want to buy more school spirit stuff in order to sort of renew their wardrobe, so we thought we’d put [Shark Nation] in a more prominent spot that you can see when you walk in the building,” Michael Berthel, executive dean of students, said

This new store is not the only new addition to Hillwood. The entrance itself has also been renovated. And when students walk in, they will notice the new blue paint surrounding locations like the concierge desk.

There is a new Greek Life Center called the Pavilion, an Asian cuisine restaurant called Bamboo, a mini student gym called that is equipped with Peloton bikes, and a new space for the Arena

Berthel helped direct the implementation of these new additions. The changes will allow for more activity diversity in the and will ensure Hillwood provides more to students as a center.

“We really sat back and looked at where everything is situated, what makes the best use of space and we came up with a plan that would really create a more vibrant Hillwood Commons for the fall,” Berthel said. The Student Body Boutique has been moved to the first floor, where Pioneer Nation used to be located. The bike studio is on the second floor in the Boutique’s old spot.

Andrew , a junior history major, is unsure about the renovations. “I do not think there was anything that needed renovations, except to switch color schemes to the new school colors,” said.

The old space that was occupied by the Promise Office is now a Greek Life center called the Pavilion. “Obviously Greek Life makes up a huge part of our campus life experience, so we really wanted to give them a dedicated space. That community has grown immensely over the last few years by design,” Berthel said. will be used as a meeting room, a place to have events, and for students to study with fellow fraternities and sororities.

As chapter for most greek organizations place on Monday, Former Director of Greek Life and Student Involvement, Joseph Vernace doesn’t see the space being a common setting for these meetings. “I think what’s really going to be the most bookable space is that board room, and that will all be bookable through our office. But in terms of all the organizations booking chapter rooms, that’ll still be through that Astra system,” he said. August 23 was Vernace’s final day as director, and Jessica Rappaport will take over as director of Greek Life and student involvement.

Greek Life students will have swipe access with their LIU ID cards to gain access to the Pavillion. Though there are plans to open the space to the entire campus community during the fall semester, according to Vernace. “Every December we have an annual tradition, it’s our Post Goes Greek Day,” Berthel said

Other changes on the second floor include new furniture for the lounge area, along with a restructuring of the plaza at the front entrance of Hillwood.

“While I think Hillwood becoming more activity-focused is good and needed, due to a lack of student activity on the weekends, I do not feel like another gym is the correct option, especially since its replacing the store that had student-designed clothes.” Students will swipe their card when they check in with a student worker at the desk to use the Peloton bikes.

Another change is the Esports arena moving next to the Pavilion on the second floor, allowing the team for more space and better computers and other equipment, according to Berthel. thinks the area might be too big for the team. As far as food is concerned, Twisted Taco has been replaced with Asian cuisine restaurant, Bamboo, offering things like sushi and bubble tea. As a student, Serken prefers sushi to what Twisted Taco served, so he looked forward to the change. “If anything, Bamboo should be a more affordable or more reasonable package for students than Twisted ”

Berthel explained that one of the reasons Twisted Taco is now removed was because of how expensive it was. Even though Bamboo will serve sushi, the sushi station will still be present in the Hillwood Cafe. Aramark employees will continue to work in and food venues on campus.