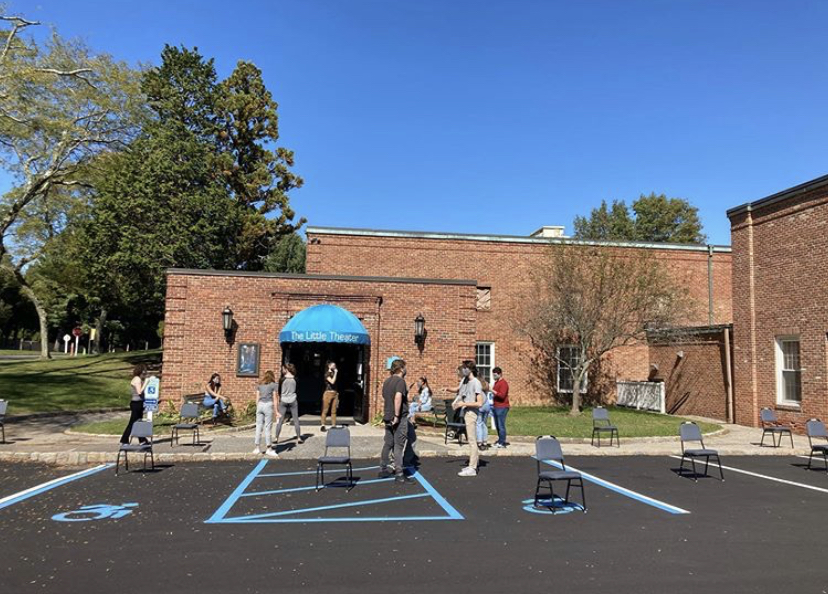 Despite a semester full of uncertainty due to the pandemic and social distancing guidelines, the cast and crew of “Roe” have used the mantra “the show must go on” during their rehearsal and filming sessions. The crew adapted what was intended to be a live show into a production that will be a virtual experience.

“[The show is] similar to a documentary in that it will show part of our rehearsal process as well as the show,” senior stage management major Indigo Coar, who is the stage manager for the production, said. “[The play] focuses on the lives of women involved in the Roe v. Wade case. The narrator of the story is Sarah Weddington, the lawyer who argued the case, though Norma McCorvey (Jane Roe) often takes over.”

Students believe that the play is timely considering the current political climate in the U.S. “With the death of Ruth Bader Ginsburg and the confirmation of Amy Coney Barrett, a play about Roe v. Wade couldn’t be more relevant,” said sophomore musical theatre major BrayLynn Willis. “RBG was a champion for women’s rights. She believed that Roe v. Wade did not do enough to establish a woman’s privacy and autonomy. Amy Coney Barrett does not believe in the protection of a woman’s right to choose and she has the potential to overturn Roe v. Wade. ‘Roe’ presents the history of the case and both sides of the abortion argument, which is all immensely important in understanding the implications of Coney Barrett’s confirmation. You will come out of the show with a deeper understanding of what you are fighting for or against. Whether you are excited or scared by Coney Barrett’s views on abortion, you will see yourself in the characters of ‘Roe’.”

Due to the COVID-19 pandemic and a recent spike in cases on campus, President Kimberley Cline moved Post classes online for two weeks. The cast was worried that their last in-person filming session would be canceled, but the university approved it.

The cast has had a hybrid rehearsal process; working online through Zoom as well as in-person in the Little Theater.

“[We always] stayed within social distancing guidelines and [we] all wore masks,” Coar said.

Students in “Roe” credit their director Hannah Ryan and the theatre department as a whole for the successful adaptability of the cast and crew.

“Hannah Ryan is such a professional and our department is so amazing for being able to give us such an artistically fulfilling experience while still abiding by CDC guidelines,” sophomore fine arts major Shannah Dolan said. “I am so proud of our department for taking COVID seriously and making sure that we are all safe. ‘Roe’ will be presented as a live stream of the finished product as well so that there are no risks at all when it comes to viewing.”

The cast is proud of their accomplishment in finishing this production during the pandemic.

“I’m so thankful I got the opportunity to work with such dedicated people on such an important production,” Willis said.

Published in Arts and Entertainment and Social Media