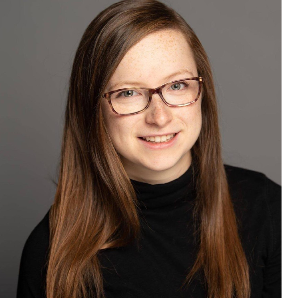 The topic of eating disorders is one many tend to avoid. The stigma more commonly echoes down high school hallways in the ears of adolescents. Rarely does it ever find its way into conversations regarding adults and their physical health, which can be problematic for adults seeking treatment and recovery. Having an open conversation about eating disorders can lead to more opportunities for these adults to get help. Kylie Brown, a junior theatre major, wants to kick start this conversation through performance, and has already begun through her one act play “The Space We Take Up.”

Inspired by a podcast which shared stories of adults facing thestrains of their conditions, Brown began writing “The Space We Take Up” in June 2017 after graduating high school. “I was listening to [the podcast] while I was driving, and I had to pull over because I was crying because they were so sad and I never heard anything like that,” she said. Though a sensitive subject, Brown wanted their voices to be heard and decided to share their stories.

The No Frills Theatre Collective took up Brown’s one act after it was entered in their theatre festival in August, and produced a stage reading on Saturday, Nov. 16 and Sunday, Nov. 17 at the Pit Loft theater in Manhattan. LIU Post alumna Sarah Taylor was the producer of the show, and was immediately hooked when it was first presented to her.

Taylor met Brown in January this year during Post Theatre Company’s new play festival, where her play, “This Can’t Happen Here,” was performed. Taylor, who adjudicates theatre festivals, has read and seen many plays that are not up to par, but was instantly impressed with Brown’s work. “For someone at this age to be writing on such a touchy subject, and with such a mature writing style, I was like, ‘Whoa, where did this come from?’ I was not writing like that at her age,” Taylor said.

“The Space We Take Up” features four main characters each facing their own eating disorders in separate storylines. The context in each scene points to conditions of textbook eating disorders such as bulimia and anorexia, but never outright labels the characters’ respective conditions. Brown said this was intentional. “I didn’t ever want to use those terms in the script because those eating disorders have very strict guidelines for diagnosis and that’s what keeps a lot of people from getting treatment especially adults,” she said. “I wanted to keep that open because I didn’t want to alienate anyone.”

The four main characters, Brian (played by Justin Demers), Haley (played by Canning Robb), Sarah (played by Julia Baker) and Trent (played by Nick Imperato) take the audience through their daily lives and the struggles they face, both big and small.

Brian, a corporate worker, overindulges in food; once he starts eating, he falls into a binge. Brian is self-conscious of his weight, and because of this, he alienates himself from his family and friends by skipping out on family dinners, parties and even holidays. He rarely spends time alone at home and drowns himself in his work to distract himself from the urge to eat. Though very disciplined, his grip sometimes slips and he is overcome with shame and disgust with himself. One of his binges leads to an accident and he is hospitalized.

Haley is a 30-year-old woman with the body of a 13-year-old girl because she does not eat. Her condition drastically affects her health and ability to work. While seeing several doctors and dietitians, Haley also deals with the stress of work and struggling to pay for rent and medical expenses. When it all becomes too much, she is forced to move back with her parents so she can focus on recovery. Haley feels as though she is a burden to her mother, who takes days off of work to care for her and drive her to appointments. Haley is haunted by the fact that girls she knew from high school are “real women,” living their best lives while she is trapped in a child’s body. Even as she is faced with the reality that her body is deteriorating, she continues to skip out on scheduled meals when she can.

Sarah is addicted to exercise and spends countless hours in the gym everyday. Her mind is so focused on counting calories and staying in shape that she is out of touch with the rest of the world. This is most evident when it comes to the sphere of the dating realm and she is approached by a man in the gym. He invites her to a 10k race, which she readily accepts, but when he tries to get to know her more over coffee or lunch, she backs out. Her romantic growth is severely hindered by her inexperience and her fear of not exercising and reverting back to a “chubbier” high school version of herself. Conflicting voices in her head repeatedly sabotage her chances of pursuing a relationship, and she makes excuses and throws herself back into exercise.

Trent was the chubby kid in school. When his friends started making fun of his weight, he wanted to make a change, which he did by starving himself. It became so extreme that one day, while driving, he blacked out and crashed his father’s car. To pay for the damages, Trent picked up a part-time job at a grocery store, which eventually became full-time after he dropped out of high school. He fights against his hunger to the point that it affects his behavior and he tunes out his mother. He eventually moves to the city, isolating himself from anyone who knew him when he was “normal,” where no one can tell that he needs help. His story remains unresolved at the end of the play, as many similar cases do.

“The Space We Take Up” has a careful balance of emotional storytelling, comedic relief and research into treatments for adults with these conditions. Brown drew a lot of the research from her own experiences with recovery when writing Haley’s character. “It was just a matter of sorting out just what implications would be most devastating for someone in her situation,” she said.

The one act was performed as a stage reading, with a minimal set of four chairs, and stylized lighting design to signify the different storylines. Directed by LIU Post alumna, Anna Betteridge, the reading also included movement that blended seamlessly with the script; the movements were direct, purposeful and didn’t take attention away from the words. Brown was delighted with the outcome of the production, which only called for four rehearsals in a span of one month.

This reading is the first step towards publication. According to Brown, a certain amount of readings and productions of the work are required before it can be published. Other than a few structural changes that could be made, Taylor believes the play has potential. “The length is perfect, four characters is perfect, [and] the fact that it is specific yet vague enough that’s why it hits home so well,” she said.

Brown’s passion for the piece reads true in the script. “You can tell,” Taylor said. “And I loved it. Seldom do I read something and enjoy it the first time, or any time.” Going forward, Taylor would like to put on a full production of “The Space We Take Up,” as it fits the standard of No Frills Collective productions. “It doesn’t call for anything crazy. The playwright loves this, this is her child and we want to coddle it,” she said.

As Brown finishes her junior year, she plans to hone her craft. “I’ll be writing a lot, writing in general. Not just playwriting, but all different kinds of writing,” she said. Students interested in reading and seeing more from Brown can check out her blog site at thetakeonadventure.com and follow her on Instagram @_kylie_brown. Students can also keep up with events at No Frills by following them on Instagram @nofrillstheatrecollective and Twitter @nofrillstheatre.