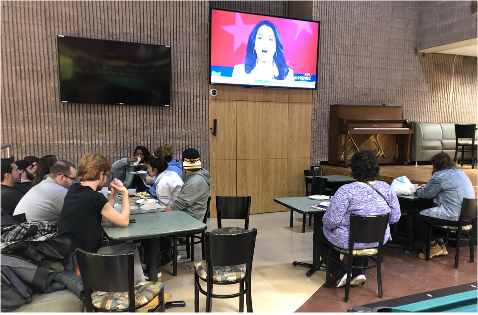 The Pioneer hosted a Democratic Debate watch party in the End Zone on November 20, which gave students the opportunity to learn about the primary candidates still in play while also discussing the sociopolitical issues that concern them. An exit poll conducted at the close of the event revealed a glimpse into the voting minds of the student body.

Big-money adversary, Senator Bernie Sanders, was the top candidate for students prior to the start of the fifth debate, leaving Senators Elizabeth Warren and Kamala Harris tied with philanthropist, entrepreneur Andrew Yang for second place, according to the survey. Sixteen percent of students polled were uncertain of their top choice before the debate began.

After watching the debate, 58 percent of students still backed Sanders as their number one choice, while 23 percent changed their minds. Fifty percent of those who shifted their choice no longer supported Sanders, changing their votes over to Warren. Mayor Pete Buttigieg also grabbed himself a small percentage of the switch, along with former New York Mayor Michael Bloomberg, who didn’t participate but joined the race just days before the debate.

To better understand what a LIU student is looking for in their ideal president, students revealed their suggestions for a candidate that isn’t already in the race. Answers ranged from well-known cartoon characters such as Lisa Simpson all the way to more conceivable options such as Representative Alexandria Ocasio-Cortez and Governor Gary Johnson. Trump’s antithesis, Hillary Clinton, even earned herself a tally. Former H.U.D. Secretary Julian Castro who is still running but didn’t quite qualify for the debate, along with Texas Representative Beto O’Rourke who dropped out of the race early, also gained themselves a mention.

The candidates recommended by students may be a representation of what students vote with: their heart, gut, mind or wallet. The debate exit survey revealed that 35 percent of students polled narrow down their choice of candidate with their minds; they’ve paid attention and done all the research they can to determine which one will best satisfy their individual goals. Thirty percent vote with their hearts or whichever one makes them feel most comfortable. Nineteen percent go with their gut decision after hearing the news and those around them, and 13 percent enter the voting booth to vote for the candidate that will best help their financial situation. Two percent said they don’t vote.

Heading to the polls on election day is important; it’s a constitutional right that initiates change. Social and political issues which concern the majority of college students have a tendency to become a tool that politicians use in a partisan government.

Climate change was voted the number one stressor for students, just ahead of wage and race equality. The subject matter that received only one vote, but is discussed almost as often as environmental change, was gun control; a debate that O’Rourke passionately involved himself in after a gunman opened fire inside a Walmart in his hometown of El Paso, Texas.

Since Buttigieg surged into first place in the Iowa polls just two days before the debate, many in the media suspected he would be the night’s frontrunner; however, he fell under the radar.

With wage and gender equality being the secondary voting issue amongst students, female candidates such as Kamala Harris, Amy Klobuchar and Tulsi Gabbard, should have polled better among students; even the debate was moderated by an all female panel. Warren was the only woman candidate to keep her head above the water.

As of December 3, Harris pulled out of the race because she “can’t fund her own campaign.” In other words, she’s not a billionaire like her opponents such as Tom Steyer and Bloomberg who poll at lower numbers but have the funding to remain in the race. But, she isn’t going anywhere anytime soon. President Trump mocked Harris’ exit in a tweet, to which she went back at him with, “I’ll see you at your trial.”

The next and sixth debate will be hosted by PBS NewsHour and Politico at UCLA in Los Angeles on December 19. Thus far, only six candidates meet the qualifying threshold.