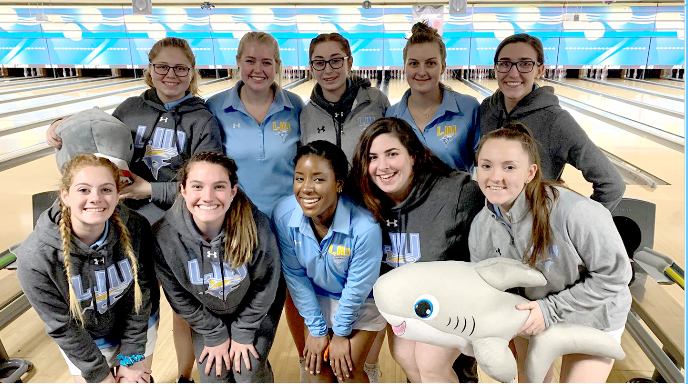 The Bowling Team is Back on the Lanes

With new colors and a newly combined team, the bowling team is back on the lanes with their goal set on winning the Northeast Conference trophy.

The team has a total of 13 bowlers, six from the Post campus, four from the Brook-lyn campus, and three newly recruited freshmen. Leading the team is Head Coach Kayla Jones, who previously coached the Blackbirds for seven seasons. She lead the Blackbirds to their first ever conference championship in 2016 and broke the program record for wins the following year with 75 won games.

Coach Jones said she didn’t know what to expect when she first heard of the announcement of the merger of the Post and Brooklyn campuses and that there was a fear of the unknown. “Change is scary, and of course, this was a major change,” she said.

Despite the uncertainty, Coach Jones said her team handled the transition well, both on and off the lanes. “The girls get along very well off the lanes and I believe each day on the lanes we get better at communication, cohesion, and helping each other be the best we can for the team,” she said.

Coach Jones also said the unification made the team stronger and generated depth. “It’s a comfortable feeling knowing we can change someone in and out,” she said. “Having a lot of talent is a good thing because each player brings something differ-ent to the table and that is what makes us a stronger team.”

The Sharks have an overall record of 21 wins and 12 losses, being 7-3 in conference. Coach Jones said the conference the team plays in is very tough, with six teams ranked among the top 25 in the nation. “It’s strong competition every weekend, every match,” she said.

Junior bowler Emily Cavanaugh was a top competitor on the Pioneers’ bowling team the previous two seasons and she hopes to show that the new team can perform this season.

“As a team we hope to prove people wrong; that we can overcome the obstacle of the merge and come together as a strong, winning NEC team,” she said.

The team’s biggest event this season was the Northeast Conference meet in Pennsylvania on Saturday, Nov. 9 and Sunday, Nov. 10. The team left the meet with five wins and one loss, which earned them first place in the league.

Senior bowler Tyler Karpinecz played for the Blackbirds last year and experienced her team falling short in the NEC Conference Championship, something she wants to prevent from happening again. She sees this year’s team’s recent success at the NEC meet as a positive indicator.

“Going 5-1 and being placed first right after the first NEC meet is something that will only motivate us to keep that spot,” she said. “The Sharks are hungry this season and there’s nothing stopping us.”

The Shark’s next competition is the UMES Hawk Classicon on Friday, Nov. 22 to Sunday, Nov. 24 in Millsboro, Delaware.

Published in Bowling and Sports