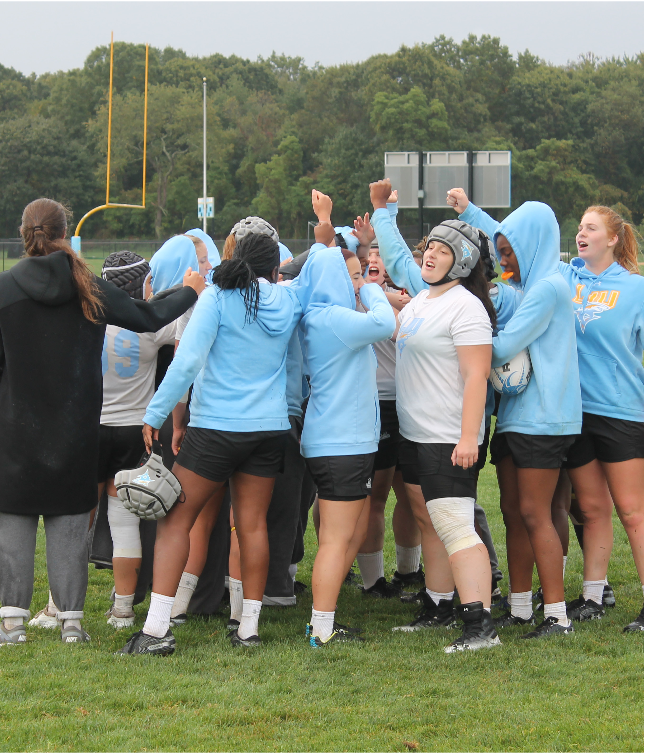 Women’s Rugby: Setting up for Success

Nine of 20 players are new to this year’s Women’s Rugby roster, the team has a new coach and is in a new division. The team has a clear goal for this season: team synergy and constant improvement. “Our goal is to get a little bit better every single day,” Head Coach Colleen Doherty said.

Women’s rugby was added to the LIU Post Division II athletic program in 2017. For the 2-19 season, due to the merger between Brooklyn and Post athletics, the team had their first season as a Division I program. “We are in the development process of building this program,” Doherty said.

Doherty started her job as the head coach for the rugby team in January 2019. Before LIU, she served as an assistant coach at Quinnipiac University where the team won three National Intercollegiate Rugby Association (NIRA) national titles. Aside from coaching, Doherty played college rugby at Quinnipiac University where she was captain for four years.

The team began their season with a lower roster, which means several players are doubling up on positions and taking on more physical stress. Most rugby teams have a roster of 25 or more, according to Doherty, but she said this is normal for new teams starting out. “It’s just a part of the development process. After [one or two years] we expect it to continuously grow exponentially.”

The team had to learn to adapt to these conditions. “This season has been a great learning experience for both players and coaches alike. We have brought in a lot of new girls so it is a different dynamic than what the team is used to,” Doherty said. “With that came a period of learning how to work each other and figuring out the line-up of who works best where and who works best with other players.”

The Sharks are halfway through their season and their current record is 0-4. Doherty said the challenge is getting great individuals to work well together. “We have a bunch of great individual athletes and rugby players and now it’s just kind of building the pieces and putting it all together,” she said. Freshman Lynsey Danko, a health and physical education major, also thinks the team needs to continue working on working together. “Definitely goal is to grow even more together as a team,” Danko said.

To pull the best out of everyone at the same time is one of the next steps towards a better result on the scoreboard. “We see moments of greatness continuously but it’s learning how to string those moments of greatness together and to make them more so that it is across the board a strong game and a strong output both in practice and games alike,” Doherty said. She thinks their irregularity could be because of their young but is convinced that pieces will fall into place quickly. “I feel like pretty much every single game, we are getting better and better,” she said. “We know how great they can be and it’s just a matter of time before we see that on the output.”

Senior psychology major Janine Gelles also believes that good results are in the near future. Their biggest strength, according to Gelles, is their adaptability. “We’ve had to change a lot in terms of positions on the field, adjusting to new players, new styles and drills and a bunch of different aspects through the season,” she said. Gelles mentioned that in their last game the team had to change their entire playing style, which they managed to do well. “No matter what, everybody is willing to figure out what’s going to be best for the team. We have definitely been showing off what we can do and now it’s just to implement it in the games, which we have seen happen piece by piece so it’s just a matter of time,” she said

Sophomore biology major Brianna Thomas agreed. “You see the change from the first game versus the last one,” she said. “The communication was better and it was more like we are working together as a team.”

Like in any DI level sport, the rugby team has had their fair share of injuries. Together with wrestling, rugby is one out of two sports in the NCAA Division I for women, and with that comes physical stress. But Doherty said the team doesn’t have any more injuries than any other contact sport or any other teams. “We don’t talk about injuries. We talk about being physically resilient and being strong for each other’s team-mates,” Doherty said. They instead decide to focus on the “.” The teammates work with their full-time strength and conditioning coach and full-time athletic trainer to ensure athletes are well prepared.

The team plays next game at home on Saturday, Oct. 12 against American International College. Going forward, Doherty sees her team continuing to develop and use the same fighting mentality they’ve shown all season. “Every time the team steps on to the game field they give everything they have which is very awesome to see as a coach and it makes us very proud,” she said. “I expect us to keep moving forward and to finish our season stronger than how we started it.”