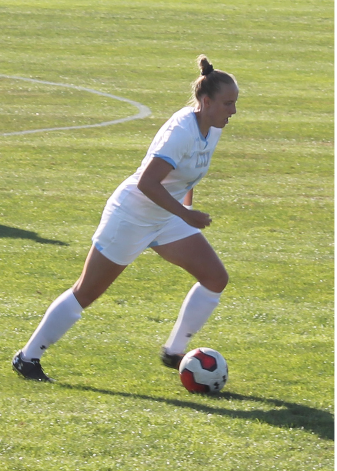 The women’s soccer team lost their first conference game this season against the Fairleigh Dickinson University Knights in a 2-0 defeat on Wednesday, Sept.18 at home. The Sharks had trouble facilitating an effective offense and sending shots into the back of the net, whereas the Knights capitalized on their chances

Only two minutes and 50 seconds into the second half, Knights senior, Jackson Bennett, sent a shot into the back of the net. A minute and six seconds later, the Knights sent another one soaring past the Sharks’ keeper to put the score at 2-0. The Sharks weren’t able to answer these back-to-back goals sent in by the Knights offense and the game ended in a 2-0 loss.

The Sharks’ offense was able to get shots off, yet none were accurate enough to go in. The Sharks finished the game by taking 10 shots, three of them were on-goal. The big difference between the two teams was that the Knights took 14 shots with six of them on goal. The blue and gold were able to generate some sort of offense, yet they were unable to capitalize in finishing shots.

Despite the loss, the Shark’s freshman goalkeeper Kayla DeTreux had a solid day in between the posts finishing the game with four saves.

Later in the week, on Saturday, Sept. 21, the Sharks faced off against Harvard University. They took a defeating 5-0 loss to the Harvard Crimson.

The Sharks now prepare to begin a NEC game stretch beginning with St. Francis College Brooklyn away on Friday, Sept. 27