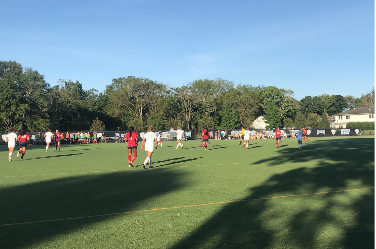 The women’s soccer team faced New Jersey Institute of Technology (NJIT) at President’s Stadium at NYIT on Friday, Sept. 13. The highly competitive game resulted in a 1-1 tie after double overtime. Freshman forward Tatiana Lizarraga scored an early goal against the Highlanders off a deflection from the post two minutes into the game. The rest of the half was a consistent back-and-forth game from both sides.

Each competitor had many opportunities on goal, but both teams were unable to find the back of the net. Opponent Tara Walenczyk tied the game 11 minutes into the second half due to miscommunication between The Shark’s defensive line. The remaining time was filled with both teams attacking towards , but the score remained a 1-1 tie after 110 minutes of play

Freshman defender Grace Cagnina and senior midfielder Gabrielle Clark explained the final score of Friday’s game was just a case of bad luck. They thought they had a lot more chances to score in comparison to previous games. They both believe their team took the initiative to control the game through their movement of the ball. Clark believes it’s only a matter of time before her team is able to prove their worth

Both players expressed frustration about the conditions of their practice and game field. Friday’s game was originally supposed to be their first home game, but they were unable to host the game due to the bad conditions of their field. Clark and Cagnina said the thick and bumpy grass made it difficult for them to prepare themselves against teams who have perfect clean-cut grass or even turf fields.

They believe it was unfair that they were unable to properly train as their opponents are. Assistant Director of Athletics and Director of Media Relations Casey Schermick did not know the exact cause of the game or the conditions of the but says safety and grass quality could be determining factors. “I do know that the grass was spotty at parts of the field and caused concern for bouncing balls and the safety of players,” he said. “This could be caused by a number of different factors, including weather patterns, diseases weeds in the grass, etc.” The Pioneer was not able to reach the director of facilities services in time for an interview regarding the fields

After letting the game field rest for another two days, the women’s soccer team was welcomed to play their first home game on Sept. 15, against University of the Pacific. The game ended with a narrow 0-1 loss.

Cagnina and Clark both agreed their current record of 1-5-1 inaccurately portrays their team’s ability. They argue their team is better than what the results show. Clark admitted the merge of the campuses has brought together a team of players filled with a lot of talent, but different styles of play. “No style has been completely defined yet,” Clark said. She believes the results will soon begin to show how talented their team is once a style of play is developed to showcase each player’s individual talents

women’s soccer team is back in competition on Wednesday, Sept. 18, at 4 p.m. at the LIU Soccer Park as they face Fairleigh Dickin-son University in their first Northeast Conference (NEC) game.