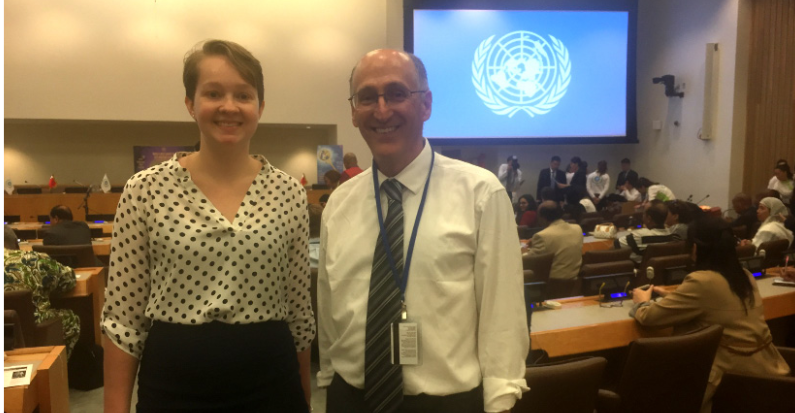 World Leaders Look Inside for Change

Students from the Honors College were invited to attend the ringing of the bell ceremony during the world peace and love summit on Friday, Sept. 27.

The honors college usually hosts merit events for students to attend, but none quite as big as this, according to senior psychology and art therapy double major Shayla Harris. This was Harris’s first time at the UN. “I loved being able to meet people from different cultures working on interesting projects, and seeing their perspectives and learning about things outside of the U.S.,” Harris said.

Many of these projects revolved around the idea of conscience, or the intent to help people devote more time to introspection and cultivating their moral conscience, according to associate professor of geography, Dr. Scott Carlin. “[The event was about] getting people more in touch with their conscience and their ability to think about the consequences of their actions in a larger global sense. Promoting a culture of peace and love,” Carlin said

The event was sponsored in part by the Federation of World Peace and Love, whose motto is “conscience is a compass in people’s hearts.” Carlin was honored by FOWPAL this summer in Salt Lake City during one of their many, world wide events leading to the day of conscience. He was presented with a clock in the form of a compass to symbolize the quest of giving more importance to conscience. The award is granted to ambassadors, civil society leaders UN officials among others. “It’s quite nice to be honored alongside them,” Carlin said

These honored guests are then asked to ring the “bell of peace” to symbolize their commitment to the goals of the day of conscience. The ringing of the bell is also an “awakening to everyone” to recognize the importance of the matter, according to Carlin. “This day is a way to ask and affirm that we can do better. Speaking our truth from our heart, and a heart of love, is a very important thing to do right now,” he said.

Tensions between countries like India and Pakistan, who are fighting over the Indian territory of Kashmir, even though it has a predominantly Muslim population, could be resolved if matters were dealt with by looking deeper into our conscience, Carlin said. “We could solve [many issues] through compassion and tolerance. We want countries to be guided by these tenants in their practice,” he said

Harris watched several world leaders ring the bell on Friday, including representatives of Hawaii and Trinidad. Leading up to the ringing, were several presentations and performances relating to the theme. “It’s always valuable to learn about the world and expanding our cultural knowledge,” Harris said. “We kind of in a bubble in the U.S.; I would recommend all students attend a cultural event like this in the future.”

Though the day’s events did not relate directly to her majors, Harris believes that any cultural experience is beneficial to all sorts of studies. Events like these are also great for networking. “I got to talk to a psychologist and it was exciting to talk about her work,” Harris shared. The psychologist she met discussed her research with Harris and presented the possibility of working as a research assistant for her when she attends grad school

Carlin echoed the importance of students participating in future UN events. The ringing of the bell ceremony was the first major event LIU students have partaken in, according to Carlin, but he encourages them to continue. “It’s fascinating to listen to experts and world leaders speak on a topic or on a whole array of different subjects,” he said.

There are a variety of contacts at the UN who invite student involvement. In this specific instance, Carlin suggested it would be appropriate for LIU to invite students to the April 5 and to even host one or two events on campus to discuss why this topic is meaningful. “This would be a great opportunity to bring faith leaders to campus to speak on the topic of conscience,” he said

Very few educators incorporate conscience in their teaching, focusing mainly on the technical aspects of work, Carlin said. “It’s important for a university community to connect to that [conscience] as well. It’s also beneficial for the UN to recognize the role we all play as citizens and how a university community can have an impact in that context. LIU is a regional and national leader to be training their students to be world citizens.”

LIU offers many opportunities for students to contribute to a global discussion on world issues like climate change, gender equality, poverty and more. Carlin teaches about environmental and economic sustainability. He projects a wide array of opportunities for students, especially on Long Island, to think about green housing, green transportation, and renewable energy.“

This is an important part of the work that is done internationally,” Carlin said. “In participating in this work, students get to explore and see for themselves if this is powerful or not, meet people they may not have met otherwise and open their eyes to the possibilities.”