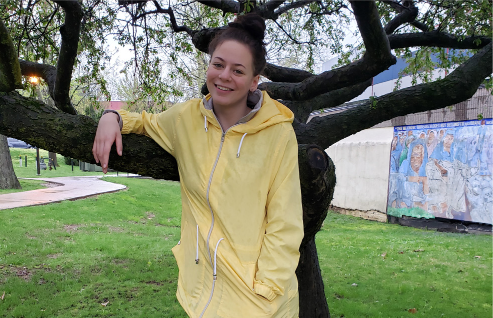 The swimming team gained a record-breaking athlete from overseas in 2015 when Karis Fuller, a senior sociology major journalism minor, was added to the roster. Fuller, who is from London, England, decided to attend college in New York because she was offered a scholarship and there were a lot of international members on the Pioneer team

Her fondest memories of her time as a Pioneer revolve around her time on the swimming team, ever since her freshman year when the Pioneers won their fourth consecutive conference title.

Breaking her former teammate Seren Jones’ record in the 100-meter backstroke “was a really great experience,” Fuller said. “Every Nationals has been incredible because I get to meet incredible athletes and see a sport I’ve grown up around.” Now that she will retire from her swimming career of 14 years, Fuller looks forward to taking a vacation unrelated to swimming

Some advice Fuller gives to her freshman self is “don’t try so hard,” and “don’t think so much,” she said. While giving effort to classes and sports is important, the key is not to be stressed about it. “You know what you’re doing, just let your heart take the lead and leave your head at home,” Fuller said. “I didn’t find what I was particularly good at until sophomore year,” Fuller said about swimming and academics. Having started on the swimming team as a distance swimmer, she holds the record for the 1,650-meter race at 17:20.04. Now, she specializes in the backstroke and holds a record of 54 seconds in the 100-meter backstroke race.

“I’m not going to miss Winnick, but I am going to miss the fact that I don’t have to cook for myself,” Fuller said about the conveniences of . She will also miss the freedom that comes with being a university student. “I have no responsibilities really when I’m here,” she said. Normal days for Fuller tend to consist of classes and swim practice before waking up to repeat the same schedule the next day. “ no breaks in my routine, which I’m going to have to get used to post-graduation, she said

For Fuller, the best part of college has been meeting her teammates and getting to live with her best friend on campus. Her roommate since 2015 now lives in Brooklyn, so Fuller enjoys going off-campus to go visit her. “I get to see what living in the city is like, and I also get to see the struggle of work life,” Fuller said. International students can do Optional Practical Training (OPT) for one year in their desired field of work after graduation. “She’s doing that, so I’m getting to see the hardships I’m going to have to face about finding a job, paying rent; what real life is going to be like,” Fuller said

graduating, Fuller plans to take a trip to Bali. “I’m getting away from Long Island, see a real beach,” she said. Eventually, she wants to work at a publishing house, but she’s going to start at a smaller job to save up for her two-month vacation. “I think I need to enjoy being a non-athlete and being a regular person for a little bit,” she said.