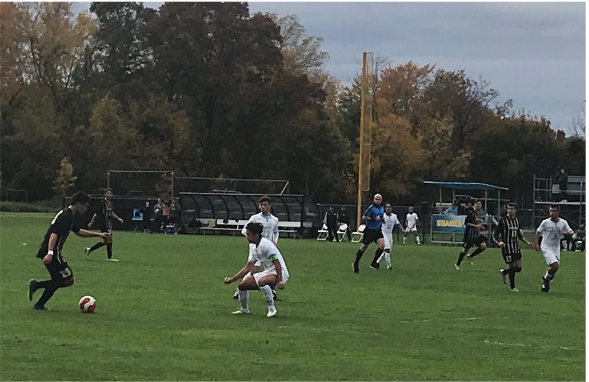 Sharks Climb up the NEC Standings

The men’s soccer team took down Bryant University in a 2-0 shutout on Monday, Oct. 28. The game quickly turned into a two-day event after heavy rain and lightning forced Sunday’s afternoon’s game to be finished on Monday afternoon.

The game was set to start on Sunday, Oct. 27, at 1 p.m. and that it did. However, only 10 minutes into the game, inclement weather and field conditions forced the game to a stop, and it was decided that the game would resume on Monday at 1 p.m.

The entire first half was dominated by mid-field play and very little scoring opportunities for either team. Going into halftime, each team was scoreless.

It was a second half spark by freshman Papa Ndoye that sent the Bryant Bulldogs back to Rhode Island with a loss. Ndoye sent his first goal past the Bryant goalkeeper in the 49th minute of play, assisted by junior Jonas Dovland. Only 15 minutes later, Ndoye sent his second shot of the day to the back of the net off a long ball pass from senior Kyle Parish.

The Sharks defense played a key role in helping goalkeeper, Demetri Skoumbakis earn his second shutout in the past three games. Skoumbakis only needed to come up with two saves in the win. Even with eight corner kick opportunities in the second half, the Bulldogs were held to zero shots on goal by the stellar Shark defense.

“Our back four has been incredible. It’s really important that they get a lot of credit because when you don’t give up goals you have a better chance of winning the game,” Mordocco said.

With only three more games in the regular season, the Sharks have placed themselves in a good position to end up among the top four teams in the conference who will get to play for the NEC Championship trophy. Before the game against the Bryant Bulldogs, the Sharks was ranked as the No. 4 team in the NEC and Bryant University was ranked as No. 2.

After Monday’s game, the teams traded spots and the Sharks are now in second place. “We’re not there yet. But any points you get from here on out is really important. We have to win our home games in order to make the playoffs,” Mordocco said.

With two goals in Monday’s game, Mordocco highlights Ndoye’s importance, but also adds that the entire team is the reason for their success, not just one player. He’s [Ndoye] really important. If he can get goals, we’ll win games. But the contributions from other guys has been incredible,” Mordocco said.

“Our center backs, Stefan [Faistenauer] and Kyle [Parish], you know, scoring goals, getting points, guys in the midfield who weren’t getting goals or assists all year who are starting to contribute on the offensive end. It’s not just Papa, it’s the whole team contributing.”

The team’s main goal moving forward is to take one game at a time. It is going to be a team effort in order to see the playoffs according to Mordocco, but he believes his team got what it takes.

Next up, the team heads to western Pennsylvania to take on Robert Morris University on Friday, Nov. 1, at 3 p.m.