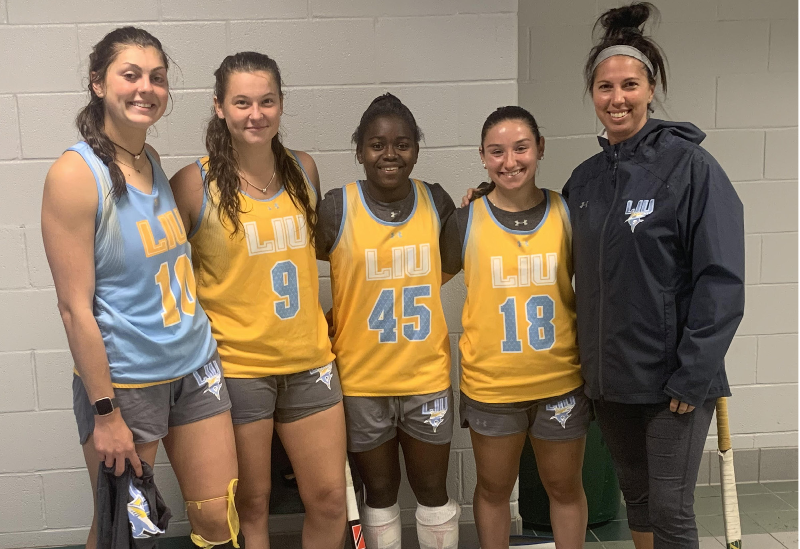 With a 1-0 win over Bryant University on Sunday, Oct. 27, the field hockey team secured their spot in the Northeast Conference championship tournament and became the first team in program history to reach playoffs.

Freshman forward Felicia King scored the game’s only goal, sending the Sharks to the postseason. After having two assists this year, King was excited to find the back of the net and score her first collegiate goal. “To be honest, it means a lot to me and the team as well that we won that game, and it was really important to me that I got my first goal,” she said.

As a first-year Division I program, Head Coach Raenee Savin said she is happy with the way her team has competed and the way they handled the transition from Division II to Division I. “We began not knowing how we’d perform at the Division I level, but we’re now finding ourselves entering into postseason play in our first year,” she said.

Going into the tournament, Coach Savin says she is excited and expects the whole team to give everything they have. “Playoff time is when everyone needs to come up big,” she said. “Everyone needs to be on their best play on the postseason because every game can be your last.”

Junior goalkeeper Rachel Vellis is optimistic regarding the team’s chances in the playoffs, saying the team has been strong defensively. “It is difficult to score against us so we are very confident,” she said.

Senior midfielder and captain Taylor Brodsky also has a lot of anticipation, knowing she has a chance to win a Division I title in her last season. Brodsky won two conference championship titles with the Pioneers in 2016 and 2017, and she looks forward to playing a championship tournament once again.

“I am really excited and I didn’t expect our season to be as successful as it is, but I’m really proud of our team and excited to go to a conference championship again,” she said

The field hockey NEC championship tournament will be played on Friday, Nov. 8 and on Sunday, Nov 10 at Wagner College in Staten Island.